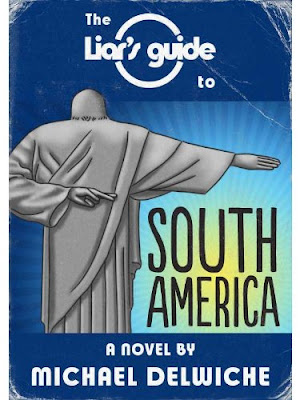 Andrew Mozart is twenty years old, naïve, shy, financially self-sufficient (thanks to a life insurance policy that paid out when his father died) and in love with Sarah, a work colleague. When Sarah leaves for a trip to South America before Andrew has declared his love, he elects to follow her. The book recounts his journey.

Michael Delwiche is a screenwriter living in the UK. The Liar’s Guide to South America is his first novel. He has a second novel (Wait Until The Robots) due out later this year.

After Sarah has left on her trip, Andrew checks her computer terminal at work and finds her email program still open. He peeks at her inbox and her sent folder and finds out where she is staying. Then he flies to Brazil to try and meet her.

Such a simple premise, but what a great read.

I got through the story in three sittings—never wanted to put it down. Andrew’s naive attempts at backpacking and staying in hostels and trying to fit in among others far more travel savvy than himself makes for a fun journey. His trip was built on a deception, and the longer he continues to track Sarah, the more wrapped up he becomes in the web of lies he has to spin.

His travel decisions are based on what he believes he is understanding from Sarah’s emails (which he continues to look at as he tries to track her down) and as we know, emails don’t always mean what they appear to say. His lack of even a modicum of travel-wisdom (this is his first time away from home) has him making dumb decisions that lead him into one problem after another. But no matter how unlikely the characters he meets and the situations he gets himself into, it never seemed far-fetched to me, quite the opposite. At twenty, I’d probably have done much the same — a scary thought!

Some sections of the book are laugh-out-loud funny, and no matter that he’s a cheat and a liar, I defy you to not like Andrew—I found myself rooting for him throughout.

This gem of a story is what self-publishing is all about. It’s well written, well structured, clever, and wouldn’t have a snowball’s chance in Hell of being picked up by a mainstream publisher.

I recommend you read it and see how Andrew sets off to South America to find Sarah, and, in the end, finds himself.

Added for Reprise Review: The Liar's Guide to South America by Michael Delwiche was a nominee in the Humor and Satire category for B&P 2013 Readers' Choice Awards. Original review ran September 26, 2012