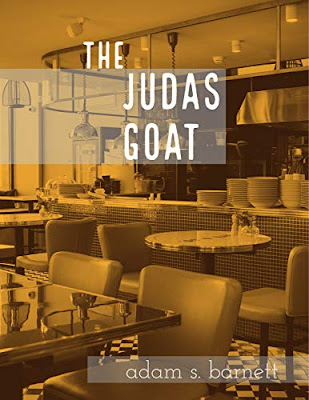 “When does self-defense become murder? Kyle Morrison is about to find out.

Kyle is an ordinary guy living a life he chose for himself. He has his own diner. He has a great girlfriend. He has his privacy and a reputation for being a good, hardworking man.

That all changes the day Kyle kills a 15-year-old would-be robber. The prosecution thinks he went beyond self-defense. His girlfriend doesn't know what to do. The Internet has made Kyle an unwilling poster child in the nation's gun control debate. His attorney knows this case can launch his own career into the stratosphere and wonders where his own lines are.

The Judas Goat is a legal thriller told from the perspective of the accused, the victim, the accomplice and the attorneys on both sides. It dares to ask the question of who we are as a society... and who we are going to be.

“Adam S. Barnett has been an attorney since 1994. His focus has been on children's rights and therapeutic alternatives to incarceration. His popular humor blog, Comics Make No Sense, ran for over 10 years. He lives in the Plains region of the United States with his wife, Laura.”

The preface to the book has this note from the author:

This book addresses the issue of gun control. I did my best to present characters on both sides of the debate in a fair and respectful manner. Please be mindful that just because I put words in characters’ mouths, I don’t necessarily agree with what they say.

I wrestled with what to rank this book because I think it does some things well and other things not so well.

The not so well category includes the setup of the robbery. The “15-year-old would-be robber” wasn’t at all credible to me. His kind-of-accomplice along with the story of how they came together and why the attempted robbery happened was only slightly more believable. While I understand why knowing both of them and what got them to the point of trying to commit the robbery is important for the setup of the rest of the story, this got the story off to a weak start for me.

Although I’m not an attorney I often pretend to know what I’m talking about in regards to legal issues on the internet and, to me, how this case should end was obvious from the beginning. (Whether it does end that way is an entirely different question.) However, I think the author did do a good job of making a case from all sides. Although I didn’t change my position, I came to understand other points of view better, which I think (based on the preface) is one of the author’s goals. I’m also not sure what the author’s opinion on the various issues raised is, which is indicative that he met his goal of presenting both sides in a fair way as promised in the preface.

I did like Kyle, the main character, and thought his story was mostly credible, both his backstory and how the story played out for him in court and afterwards. But too much of the setup was weak, which made for a story that was hard to believe due to the weak foundation in the beginning.

A small number of proofing errors. One issue that I spotted multiple times was an issue that attorney authors seem to have a problem with, using the word waive when what they intended was wave. As any attorney should realize, once you’ve waived your hands, you’ll never be able to do it again. (Yes, I’m going to continue using that bad joke every chance I get.)