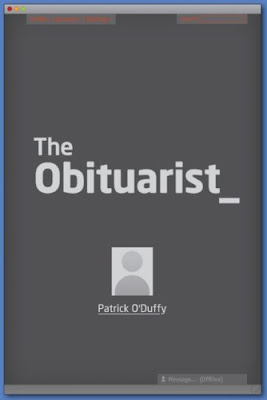 Kendall Barber is an Obituarist, a social media undertaker who cleans up the electronic trails of the deceased. Kendall’s day doesn’t start well. First he’s beaten up by a Hell’s Angel and told to stay away from Tonya Clemmens. The trouble is he’s never heard of her. Then Tonya herself arrives at his office – she wants Kendall to find her missing brother. Against his better judgement Kendall agrees and it’s then that things really start to go wrong as local maniac, D-Block and, worse, the police, all show an interest in the case as well.

Patrick O’Duffy works as an editor for a major educational publishing company. When not working Patrick spends his time writing. His output includes over thirty role playing books, however more recently he has turned to short stories and e-books. The Obituarist is his most recent work. He’s also a Batman fan.

You can read more about Patrick O’Duffy on his website.

I really enjoyed The Obituarist. It’s clever, sharp and funny. The dialogue is great and the characters well described, from the grubby policeman, Grayson, who uses Barber to get what he wants, through to the maniac bikers, Kowalski and Ploog, who are trying to permanently silence him, they’re vivid and full of life. The location for the story, Port Virtue, is as grimy as its residents. The pace clips along with the action starting at almost the first page and doesn’t let up to the last, helped by The Obituarist being written in the first person. I really appreciated the sense of humour and the direct style in which O’Duffy tells the tale - there isn’t a wasted word, the sign of a well written novella.

However, just when I thought I had the story figured out (and so did the characters!) The Obituarist delivered a couple of wrenching twists and surprises that were very cleverly done…I’d love to say more but I don’t want to give anything away.

At just over 20,000 words it’s a quick read and could be taken in one bite (you’ll want to once you start). In fact, I did read it all over again, even though I knew what was going to happen, just to look at how everything unfolded from a different perspective.

In the near future I’ll be happily tracking down Patrick O’Duffy’s other works. If they’re as good as The Obituarist I’ll be a happy man.

Added for Reprise Review: The Obituarist by Patrick O'Duffy was a nominee in the Humor and Satire category for B&P 2013 Readers' Choice Awards. Original review ran December 26, 2012