Review: Soap on a Rope by Barbara Silkstone 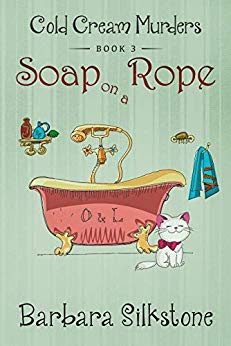 “When Nelson Dingler is found dangling from a chandelier—feet-side up—Grams Dingler determines to find her son’s killer. Can Olive help her best friend save her feisty grandmother from suffering the same fate? And can the Cold Cream Shop survive while Olive psyches out the killer?”

If anyone ever said solving cozy mysteries were too simple, Soap on a Rope would prove them wrong. In this novel Olive and Lizzy try to solve Nelson Dingler’s murder, keep their new shop open, find a sponsor for their products, and keep Grams’ secret all while avoiding the police detective, Kal. Those who think cozy mysteries are simple haven’t read Barbara Silkstone’s novels.

Nelson Dingler is Grams’ son and Lizzy’s father, he was a rotten, angry soul who had many enemies. However, the position he was found in narrowed the search down. This is where Grams’ secret comes into play about Nelson’s early years. As rotten as Nelson was, she is still his mother.

The shop is being minded by Ivy LaVine, one of Olive’s grandmother Nonna’s elderly friends who lives upstairs from Olive. Ivy and Myron Myers, are becoming quite an item. Ivy used to work at Macy’s in the cosmetic department and has some big ideas for the little shop. This becomes a thorn in Olive’s side, which she will have to deal with carefully.

Solving Nelson’s murder becomes a three-ring circus when Irma, Nelson’s ex-wife, shows up in the mix. What a character she is! As always, no stone is left unturned as Olive makes sense of this oddball case. I do wish she would stop pushing Kal away. I like him and would like to see more interaction between them. I know it would add a bunch of complications, but hiding it from Lizzy is not the way to go.

I enjoyed this caper and meeting Nonna’s idol, Sophia Napoli, an Italian film star, was fun. I also liked meeting Sophia’s handsome bodyguard, who was always in the background if Olive needed him. It was a fun element to add the Italian bodyguard along with Myron, Olive’s ex-patient whom may have been a mob boss, who followed her from New York to Starfish Cove, Florida, and a dejected detective all looking out for Olive’s wellbeing. Oh, and how could I forget about Wonder Dog, who is right there by Olive and Lizzy’s side? Honest, if you enjoy cozy mysteries with humorous elements, don’t miss this one.

Soap on a Rope is book 3 in Ms. Silkstone’s, COLD CREAM MURDERS series. At the end of the story is a recipe for heavenly lavender lemon honey soap.