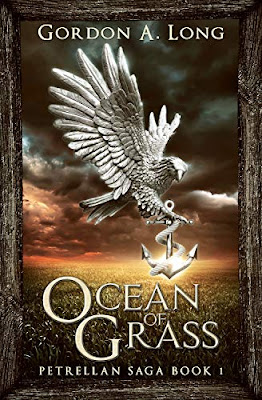 “Beached on an unforgiving shore, her beloved Sea Eagle destroyed by the Priest-Admiral’s fleet, Sarasha must overcome her crippling injury to lead her people to a new, free life on the Great Prairie.

But strong leadership creates dependence, and dependence leads to tyranny, and the whole vicious cycle will start over again.

How can she lead without commanding, guide without taking control?

And her foot still hurts.”

Gordon A Long: “Brought up in a logging camp with no electricity, Gordon Long learned his storytelling in the traditional way: at his father’s knee. He spends his time editing, publishing, travelling, sailboat racing and writing fantasy and social commentary, although sometimes the boundaries blur.

First of all, I have to say, I love this book cover! It’s striking and gorgeous.

Sarasha Tourn is the daughter of Arlijn Tourn, the Captain of the Sea Eagle. Having rejected the Priest Admirable politics and strict rules, a small fleet battles for their freedom. Having escaped they are all aware they will be branded as heretics, and the Priest Admiral’s will likely return to destroy them all.

Having beached their ships and burned them to hide where they landed, they now seek a place suitable to settle. They need to learn ways to make a living on land. The people in the settlement established there fear the sea people, with good reason. They have been raided by sea people before.

As the land lovers seek to exert dominance, the sea people are trying to defend themselves using non-violent methods unless attacked first. The sea people are also struggling to establish a society that isn’t led by a single person. They want everyone to have equal input on how they are governed. Currently they are all looking to Captain Tourn to lead them, with Sarasha by his side. Sarasha is a knowledgeable young woman, she reads books, lots of books. She is also strong-willed, and speaks her mind. Ever since her devastating foot injury, which happened during the battle for freedom from the Priest Admiral’s Fleet, she feels the need to prove her worth to her shipmates.

I found Ocean of Grass fascinating and enthralling. From the beginning it is easy to get swept away by the story and become invested in not only Sarasha’s success, but the success of all the sea people. The reader will find some well-placed humor throughout as well.  The plot twists and turns with successes from skirmishes to all-out war, and heartbreaking failures. Yeah, Mr. Long made me cry, real tears, and I’m not talking about a few tears!

However, I am looking forward to following this saga.