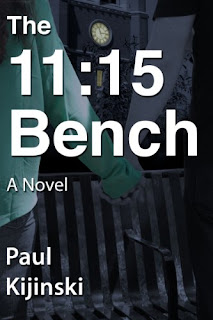 Roger, a forty-five-year-old school teacher, reminisces about his past, and in particular a four-year-long teenage romance with Regina Tucci--the love of his life.

Paul Kijinski is the author of the novel Camp Limestone, a winner of the 2007 Paterson Prize for Books for Young Readers, and other works of middle grade fiction. The 11:15 Bench is his first novel for adult readers.

Kijinski was born in Garfield Heights, Ohio, and earned degrees from Oberlin College, The Ohio State University, and John Carroll University. He began writing seriously while serving as a missile officer in the U.S. Air Force. The solitude of underground launch control centers provided a uniquely rich environment for putting pen to paper. His final assignment in the military was teaching English at the Air Force Academy.

Kijinski is currently an elementary school teacher in South Euclid, Ohio. He and his wife, Eileen, have two adult sons.

You can check out Mr. Kijinski’s other books on his Amazon Author page or follow him on Facebook.

A lovely story, tenderly told. The author weaves his tale against the backdrop of a small mid-western university town with such care and attention to detail that the location really came alive for me. Regina hails from an Italian community, and Roger’s parentage is Polish. The cultural observations, particularly amongst the older generation are fascinating and fun.

Our narrator shares anecdotes from his past, and his joy and regret over his romance with Regina as though he were a friend reminiscing with us over a cup of coffee at the local diner.

I suspect some of this story is based in fact—after all the author lives and teaches in the Mid-West where the novel is set, went to the same university as the main character, and also happens to be a school teacher. So I hope Mr. Kijinski won’t be offended when I say at times I wanted to shake Roger and tell him to wake up, to be more assertive, to ‘go for it.’ But part of the character’s charm is that he’s so real, and he shows human frailties and makes mistakes as we all do.

The writing flows: wave-like, smooth, and thoroughly engaging. I’m glad I read The 11:15 Bench. I suspect you will be too.

Added for Reprise Review: The 11:15 Bench by Paul Kijinski was a nominee in the Contemporary/General Fiction category for B&P 2014 Readers' Choice Awards. Original review ran January 22, 2014.

Thank you for this reprise review. Somehow I missed this book, but I'm grabbing a copy now.
Having grownup in a similar community in New Jersey (Polish and Italian) I am looking forward to reading Mr. Kijinski's tale. I have bittersweet memories of those long ago days.