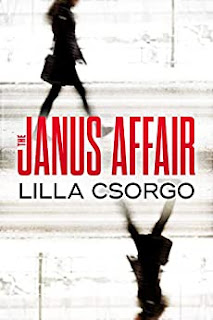 The police are at Janice's door, and so is the media. Pictures of Ric and the seductive but unstable daughter of the prime minister have hit the news.

‘Have you ever suspected your husband of leading a double life?’ asks the detective.

Two women, practiced in avoiding each other, find their lives interwoven as they both try to find out what happened to Ric. But sometimes even two perspectives on the same man don't add up to the truth.”

An economist based in Toronto, a playwright, and an author who has had short stories included in multiple anthologies, this is Lilla Csorgo’s first novel.

Different, strange, unique, offbeat, unorthodox … the thesaurus has all kinds of word suggestions to describe this book. They all fit, to a point, but none seem quite right. Told from two points of view, the book is part mystery and part women’s fiction. The mystery, where did Ric Hawthorne disappear. His wife, Janice, gives us one point of view. She doesn’t know where he went. For the most part she doesn’t really care. (Yeah, at this point they don’t have much of a relationship.) Then we have Justine, Ric’s former fiancé who was never really out of Ric’s life. Does she know where he is or not? As both do what they need to in order to move on with life while also trying to stay out of the way of the police who are searching for Ric, we have a mystery going on, but also get an interesting look into the lives of both ladies, plus Ric. Do we find out what happened to Ric? Are the ladies both innocent of wrong doing? How about Ric? Do we even care if he gets found? All those questions and potential answers went though my mind as I read this book, enjoying the story, but never very sure about where things were headed or where I wanted them to go.