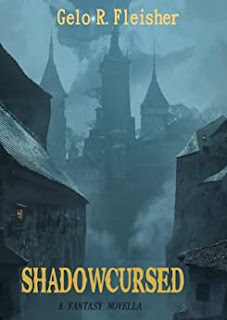 “Bolen is a thief, plying his trade under the spires of an ancient and sprawling city. Worried that he's growing too old, Bolen has lined up a risky job, just to prove that he can still pull one off.

Kings have killed for it, demons have coveted it, priests have prayed for it, and in a few moments it will be in his hands. And when it is, the adventure of his life will begin.”

“Gelo R. Fleisher is an author and game developer. He lives on the East Coast, with his wife and daughter.” This is Mr. Fleisher’s debut story and you can find out more about him at his blog.

This fantasy novella was a nice surprise. Mr. Fleisher has written an enthralling story full of descriptive prose that will pull you into the story so thoroughly you can practically smell the stench. He has also given us a bad guy to root for as we sit on the edge of our seats as the plot twists and turns.

The story is character driven as we follow Bolen down the streets and alleys as Fleisher paints us stark pictures of the corruptness throughout this ancient city and its ruling family.  When Bolen gets his hands on a coveted ruby statue, which he steals from the safe inside the fortress walls, we know it is magical. The story behind it is fascinating in and of itself, the powers it wields may even be considered miraculous.

As a twist of fate, Bolen is then enlisted by a shadowy figure to steal this statue that he has already stolen and fenced. The story that unfolds is an original and captivating rollercoaster ride that will leave the reader fully satisfied. I think this is an Indie author to watch for in the future.