Review: The Secret of Rosalita Flats by Tim W. Jackson 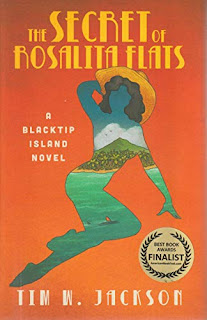 “The Secret of Rosalita Flats follows a man trying to unload the football-shaped house he inherited, while dodging the backwater Blacktip Island's quirky collection of con artists, smugglers and other ne'er-do-wells: an ornery housekeeper who refuses to be fired, a rum-soaked attorney with his own agenda, a chair-wielding resort manager who thinks he's an avenging angel, and a self-styled psychic who may be able to see the future. There's also a mysterious someone--or something--trying to scare Cal off the island. Cal has to figure out what his old man was mixed up in, fast, if he's to sell the house and get off the crazy little rock alive.”

A former photojournalist, Tim W. Jackson now splits his time between captaining a boat, teaching people how to scuba dive, and writing. He has one novel, Mangrove Underground (in addition to this one) as well as multiple short stories available, all set on the tropical Blacktip Island. For more, visit Mr Jackson’s website.

Throw an apparently normal guy, Cal, into a strange situation, in a strange place, and surround him with people who I don’t want to call strange (only because I’m being overly nice, you’d call them strange). I’ll call them unique, yeah, that’s it. Then have, ummm, … the thesaurus suggests bizarre might be an alternative, so have bizarre things start happening, and you’ve got a high-level idea of what this book is like. At first it seemed like a fairly straightforward situation (at least if inheriting a property … make that maybe inheriting a property owned by your late, estranged father who you’ve been cutoff from for years is straightforward). There was a quirky housekeeper and the house had some idiosyncrasies, but still, things didn’t seem that strange. But as the story went on rather than getting more clear as to what was happening and where things were going it got more confusing and kookier (the thesaurus pointed the way for that word too). Ultimately The Secret of Rosalita Flats was a fun and enjoyable read that kept me entertained and guessing, but be warned, just when you think things are starting to make sense, the story is likely to go in some odd, off-kilter direction.

Thanks, Al, for the great write up!