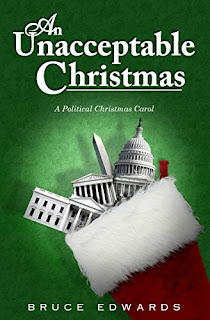 “All 6-year-old Michael wants for Christmas is to welcome home his missing father. Stating his wish in a letter to Santa would be the norm for one so young, only the cheerless boy has never heard of the jolly old elf. Federal courts have ruled, once and for all, that Santa Claus does not exist. Lawmakers have thereby banned displaying Santa’s likeness and singing songs that mention his name. Outraged, Michael's teenage sister launches a spirited campaign to force Congress to repeal the ban, insisting that believing in Santa Claus is every child's right.”

“Bruce Edwards writes young-adult fiction that explores relevant subjects. Topics range from the trappings of modern technology, to the wickedness of corporate greed, to the absurdity of Washington politics. Case in point is his award-winning The Age of Amy series and An Unacceptable Christmas.

Through fantasy and imagination, Bruce's compelling stories promote an optimistic worldview. States the author: ‘Kids today see a troubled world and simply ask, Is this the best you can do? His books encourage young folks to explore alternatives to the status quo.’”

Sixteen-year-old Holly Jenkins takes her younger brother, Michael, to the mall to check out the Christmas decorations and activity booths offered its customers. While there a rogue Santa asks Michael if he has been a good boy this year. Adults freak-out, mall security is called, then the police arrest Santa, and news crews show up to speak to eye witnesses. It’s been ten years since the Santa ban has been signed into law making it a federal offense to display, sing about, or tell stories that include Santa. Christmas has survived the ban with little impact. Holly remembers this time well, but Michael, at six-years-old, has no idea who the man in the red suit is or what he did wrong. Holly gives Michael a bare bones explanation. If she had just left out the part about how children used to write Santa Claus letters with their Christmas wishes.

Holly’s father is a skilled physician who volunteered his services to a war torn area overseas. When Nora, Holly and Michael’s mother, gets a phone call from the State Department which informs her that her husband is missing, Michael over hears. In his effort to help he pens, well crayons, a letter to Santa for help to find his father. He doesn’t want gifts all he wants is for his father to come home. Then hands the letter to Holly to mail to Santa for him. He doesn’t realize this is a federal offence that could land his sister in jail.

Now Holly is on a mission to get the Santa ban revoked by suing the Federal Government. She contends the Santa ban infringes on people’s rights and is therefore unconstitutional. She starts at the city council meeting and speaking to talk show hosts. Each new challenge she has to up her game. There are several twists and some devastating blows where Holly has to battle her conscience and remind herself that Santa invokes hope, good will, and joy. And that is worth the fight she is faced with.

The story has a nice pace and the events pull you into the story. Holly is wise beyond her years. She has been raised to confront problems in a logical way, and won’t give up a fight for a good cause. I loved watching her grow in character and challenge authorities. An Unacceptable Christmas is a uniquely inspiring tale that is told creatively and with heart. The secondary characters add depth and help carry the story to a satisfying conclusion.

Email ThisBlogThis!Share to TwitterShare to FacebookShare to Pinterest
Labels: 5 Star, Christmas, Coming of Age, YA