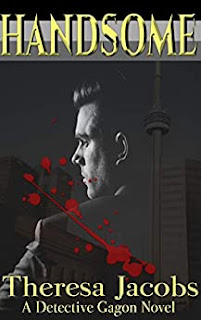 “Being handsome has its advantages and affords him easy access into people’s homes. They quickly learn you can not judge a book by its cover when they pay the ultimate price with their lives. He didn’t ask to look the way he does, nor to lose his loving mother at such a young age. Dealing with unwanted memories, he will find a way to erase his past by cleansing the city as he sees fit.

Detective Marcy Gagon, finds at times her relationship with the lead coroner, Krista Jones, a harder case to crack than the one she’s trying to solve. She feels alone in the hunt for a man whom she believes is a serial killer. The Chief of Police refuses to entertain the possibility that Toronto has yet another serial killer until she can bring him solid proof. But when another couple are killed within 24 hours of the last, Marcy gets the push she needs, and new leads come pouring in. Fully engulfed in her job, she also learns a deeper secret to her girlfriend’s past that only strengthens their bond. Hot on the heels of a killer, Marcy must somehow bring his reign of terror to an end without letting her personal life interfere.”

Theresa Jacobs is the author of several books in several genres including at least one non-fiction book on writing. She has also been the contributor to at least a few online magazines.

Handsome is an intense and enjoyable read with a different feel in some ways from a typical mystery with a police detective as the main character. We as the reader know who the culprit is early on, but this tends to make for a more intense read because we also have a feel for just how messed up he is. I found it made me pull for Marcy (aka Detective Gagon) to figure out who he was and stop him even more than I typically would. But it is also apparent that the killer has some issues that while it couldn’t justify what he’s doing, at least makes you feel sorry for him. Trying to understand his past from the various clues that come out and pulling for Marcy to find him before he did more damage were the main feelings I was having as I read and tried to guess where the story was going next. I also found a subsidiary story thread, largely unrelated to the main one, of the clash between Marcy and her girlfriend over work and how much demand it should put on their time was an interesting one, mainly because it felt (correctly, it turns out) that there was more to it than was obvious at first glance. All in all an intense, engaging mystery.

Although not explicitly stated anywhere, a few clues (including the setting of this story) lead me to believe the author is from Canada. Spelling conventions used and an occasional word choice support that guess.

Hi, great guess, yes I am canadian and thank you for the honest review. I appreciate it, and am thrilled you enjoyed the story. Theresa