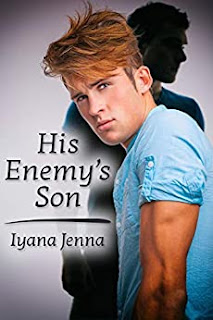 “Young oil mogul Luke Garrett can't get his business counterpart to return his calls after a deal goes bad. After making every effort to contact the man, Luke decides to kidnap his former partner's son, Alex, to gain the man's attention to their shared problem.

Alex Parker is celebrating his eighteenth birthday by getting drunk with his best friend ... and studiously avoiding the debutantes his father tries to throw his way. His night of revelry is cut short when he finds himself a houseguest of a rather unconventional abductor.

Though he's angry and scared, Alex is drawn to Luke, whose plan falls apart when his attraction to Alex generates a change of heart. Luke can't do anything else but turn himself in to the police, much to Alex's dismay. Will Alex lose his chance at something great before it even begins?”

Iyana Jenna writes sweet romance, aimed at young or not-so-young adults with the two parties in the romance almost always being men. For more, visit their website.

I describe this short story as a thriller as well as a romance, since the protagonist, Alex, is abducted, more or less, and then finds himself attracted to his abductor. Obviously, if this is a romance, that feeling must be reciprocated as well. Possibly needless to say, these seemingly contradictory things serve to make this quick read extremely quirky. Quirky enough that a reader who picked up the story with any expectations might not find what they hoped for. Luckily my only desire was for a short read outside of my norm, so it worked for me. It was both short and way outside my norm.

Definitely not explicit. Sex may be implied, but barely.