Review: The Assassination of Robert F. Kennedy by Tim Tate and Brad Johnson 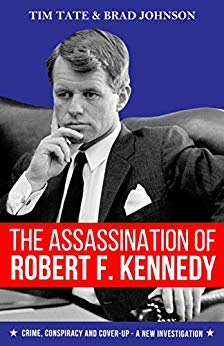 “At 12.16am on Wednesday, June 5, 1968, Senator Robert F. Kennedy was shot and mortally wounded in the kitchen service pantry of the Ambassador Hotel, Los Angeles. He had just won the California Primary, an important victory in his quest for nomination as the Democratic Party’s candidate in the US Presidential election late that year. A little over 24 hours later, he was pronounced dead.

A 24-year-old Palestinian immigrant, Sirhan Bishara Sirhan, was captured in the pantry with a smoking gun in his hand. Eyewitnesses had seen him step out in front of Kennedy and begin shooting with a small calibre revolver. He fired all eight bullets in its chamber. In April 1969, Sirhan was convicted of Robert Kennedy’s murder and the wounding of five others. He was sentenced to death, later commuted to life imprisonment. He has been in prison – often in solitary confinement – ever since. Fifteen applications for parole have been rejected.

That is the official history of the murder of Robert F. Kennedy. Now, on the 50th anniversary of the assassination, award-winning investigative journalists Tim Tate and Brad Johnson uncover the true story.

This book is the result of more than 25 years’ painstaking forensic work. The authors have scrutinised more than 100,000 official documents, located previously unknown recordings, and conducted original new interviews with key figures in the case.

They show that Sirhan could not have fired the fatal bullets, reveal detailed evidence of a murderous conspiracy involving organised crime, and disclose CIA documents detailing successful experiments to create a hypno-programmed political assassin. The book also unmasks the likely identity of one of the most enduring mysteries in the case – the infamous ‘Girl in the Polka Dot Dress’.”

Tim Tate is a British documentary film-maker and the author of numerous non-fiction books.

I wasn’t sure what to expect from this book. Was it going be a big conspiracy theory? Was what it said going to seem credible? For the tl;dr crowd, the answers to those questions are no and yes.

The somewhat more detailed explanation is that the book does a good job of explaining not only the official story and how it came to be, but also pointing out where that story has issues. Unlike a conspiracy theory, they don’t point fingers and spin yarns with conclusions about who did what and why, instead just laying out the facts and clues, leaving it to the reader to draw their own conclusion. I certainly found the evidence they presented to be disconcerting. I’ll leave it to you to draw your own conclusions.