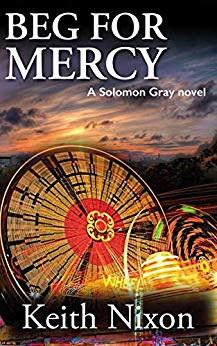 “Fifteen years ago Duncan Usher was sent to prison for killing his wife, Valerie. Young Detective Solomon Gray was first at the scene. His biggest case yet.
But Duncan Usher didn't kill Valerie. While someone was strangling Val, Usher had another man's blood on his hands. Usher took the fall for Val's death, but now he's out. Released on a technicality. He's held a grudge all this time, and he won't stop until he gets revenge on the dirty cop who framed him. Usher sets his sights on DS Solomon Gray.

And he has no qualms about using Gray's son, Tom, as a pawn to get what he wants.

Beg for Mercy is the third book in a series featuring Detective Sergeant Solomon Gray.”

If you’ve read the two prior books in this series you’ll be familiar with not only Solomon Gray, the series protagonist, but also his coworkers in the local police department, plus Frank McGavin, the local crime boss. While he got a brief mention previously, it wasn’t obvious that McGavin essentially took over for Duncan Usher, who was convicted of murder in Solomon’s first big case. When Usher is unexpectedly released from prison due to a technicality, it kicks off an investigation of the original investigation and those involved in in.

The story switches back and forth with scenes from “Then” (15 years ago when Gray was on the team investigating the murder of Usher’s wife) and “Now,” as Gray tries to piece together what happened and what went wrong back “Then.” The mystery and Gray’s investigation are what you’d hope for and expect in a good thriller such as this. I also  found it interesting in that knowing some of the characters from previous books, then contrasting their interactions in the first investigation (back ”then”) to how things are “now,” gives a different and more complete feel for how they’ve evolved over time, not only as policemen, but as coworkers.

Last, all through this series has been the specter of Tom, Solomon Gray’s missing son, hanging over every investigation. Gray is always looking for clues, digging behind the scenes where he can, convinced that Tom is alive somewhere and that he’s going to find the person with the answer if he keeps looking. I’ve wondered whether there was anything to find, thinking Tom’s body had probably been swimming with the fishes of buried in a grave that was never going to be discovered. But Gray appears to make enough progress on this quest in this book that I’m not nearly as pessimistic. Maybe the next book will be the one to finally find out what happened to Tom.

If you like darkish crime fiction, especially with a little British flavor (make that flavour), this series including this latest installment is a good fit.

This is the third book in this series. It can be read as a stand alone with the needed back story being explained as needed.