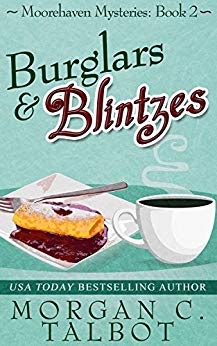 “Moorehaven is swarming with guests during summer’s last hurrah, and Pippa has her hands full at the mystery-author B&B. When her gossip-group connections inform her that a local construction project has unearthed a skeleton with a pocketful of Spanish gold, the news spreads, and treasure hunters flood the beaches. But the skeleton has a more recent connection to the area than anyone suspected, unearthing a shameful secret that hits far too close to home.

A marine salvage team rolls into town, seeking the rest of the treasure. When they hire Pippa’s boyfriend, Lake, to be their pilot, the team’s pretty spelunker quickly stakes a claim, rousing Pippa’s jealousy. But Pippa’s been playing tug-of-war over Lake ever since his ex-wife, Mallory Tavish, became the new acting chief of police.

When a killer’s strike brings tragedy to Moorehaven’s door, Pippa must rally her friends, family, and mystery-writing guests to catch the murderer before she loses someone she can’t live without and all the warmth of summer dies with one last gasp.”

“USA Today Bestselling Author Morgan Talbot is an outdoorsy girl with a deep and abiding love for the natural sciences. Her degrees involve English and jujitsu. She enjoys hiking, camping, and wandering in the woods looking for the trail to the car, but there isn't enough chocolate on the planet to bribe her into rock climbing.”

This is the second cozy mystery in this series and for cozy mystery fans makes for a good read. The setting, a bed and breakfast that limits its guests to mystery writers. This means there is never a shortage of amateur sleuths hanging around to throw their two cents in about the murders that apparently happen frequently in the fictional Seacrest, a small town on the beautiful and rugged Oregon Coast where it is located. As with every small town, there are plenty of rumors, everyone knows (or thinks they know) everyone else’s business. All of this combines to give our protagonist, Pippa Winterbourne, plenty of things to check out and ponder, as she tries to find the guilty parties. Burglars and Blintzes is an entertaining read that kept me guessing to the end.

Thanks so much for taking the time to review my mystery! You're welcome at Moorehaven anytime.