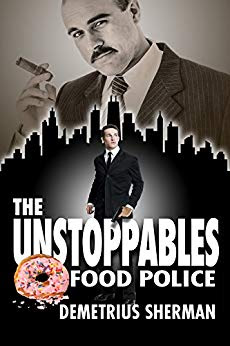 “When the government bans foods people crave, modern Chicago becomes roaring, blasting 1920's Chicago. Speakeasies appear and gangsters war to become king. And to battle the most dangerous gangster of them all, a group of men assemble: The Unstoppables.”

In addition to this book, Demetrius Sherman is the author of three other novels, all appear to be thrillers although at least one includes vampires.

I suspect a team of editors would have a lot of suggestions regarding this book. They’d tighten up some of the prose, possibly suggest that a few places were telling when maybe they should be showing instead. One of that team might also express an opinion that a few spots in the story were possibly expecting the reader to suspend disbelief a little too much although some might feel given the premise of the story and the genre that this wasn’t an issue. I’m sure a proofreader would spill a non-trivial amount of red ink for a book of this size.

The premise, that unhealthy food, those that are high in fat or sugar or other tasty ingredients like that, have been outlawed, is a good one. The underlying story, imagining what might happen if this law were to be passed in current times, satirizes the days of Chicago bootleggers during prohibition. It has potential. Unfortunately, it’s lack of polish means it fell well short of that potential.