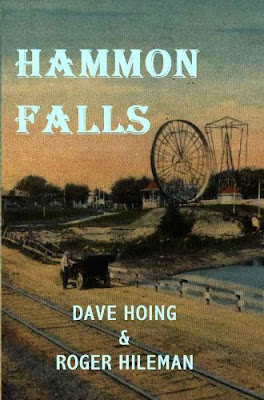 Dave Hoing lives in Waterloo, Iowa, where he works for the library at the University of Northern Iowa. He has published dozens of short stories in various publications.

Roger Hileman works as a “test development associate” for ACT, Inc.
This was the first novel for both authors. They have since published a fantasy novel, Voices of Arra.

Do a search in the Kindle store for books with the title “sins of the father.” The idea that a bad decision can snowball through multiple generations is at least as old as the bible and is the basis of many stories. It is such a popular premise because it works well in illustrating consequences. Hammon Falls is epic in scope, stretching seventy years and two continents.

Hoing and Hileman spin a good yarn. I’m sure someone could point out imperfections somewhere, but they’re going to have to get nitpicky to find them. The characters are real, with imperfections, some minor and others serious. The small town atmosphere and the changes over time in both the characters and the world around them all ring true. Hammon Falls is a classic tale, done well.

No significant typo or proofing issues. The Kindle version I received for review had a few formatting issues, with headings pertinent only to a print version embedded in the text, and some instances of the space missing between two words.