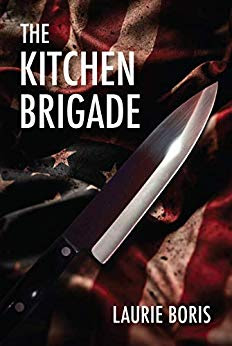 “If an army marches on its stomach, can a cook find a way to win the war?

It’s 2049. In a Russian-occupied America torn apart by civil war, Valerie Kipplander—daughter of the assassinated secretary of state—is thrown in jail. When the regime discovers this daughter of privilege is also a talented culinary student, she’s forced into service in the kitchen of a Russian general whose troops occupy New York.

The general’s mansion proves a prison of a different sort. The head chef has a mysterious past, the Russians have a more insidious agenda than what they’ve promised, the resistance wants her on their side, and one of the guards wants her dead.

Valerie knows she must take a stand. The risks are monumental, the choices few. But how long can she serve the men bent on destroying her beloved country?”

“Laurie Boris has been writing fiction for almost thirty years and is the award-winning author of eight novels. When not playing with the universe of imaginary people in her head, she's a freelance copyeditor and enjoys baseball, reading, and avoiding housework. She lives in New York's lovely Hudson Valley.”

I’ve read more than a few dystopian novels. The Kitchen Brigade has the elements those I like tend to have, most significantly happening in the near future with a story world that I can easily relate to and picture myself trying to survive in. I’ve read a few of Laurie Boris’ novels as well, and despite none of them being dystopian, this one had many of the same qualities as her others did including relatable and believable characters, writing that read smoothly and does a good job of putting your imaginary self in the middle of what’s happening.

But this book, like her others, is also unique. Valerie, the protagonist of The Kitchen Brigade, isn’t like the hero of any other dystopian novel I’ve read. Exactly what her situation was and where it was going to take her wasn’t clear until the end, to either us or to Valerie. But I was pulling for her to successfully make it through this experience, whatever succeeding turned out to be.

Thank you, Big Al and Pals!

Thanks you, Laurie, for sending us your book.

I couldn't agree more. Well, I could but that would be excessive. I enjoyed this book greatly. While I'm not an expert on the classic dystopian novel, I trust Laurie (after reading many of her books) to hook me on the story. The dystopian books I've read have provided me with credible stories about horrid but believable futures. The energy of this book hooked me start to finish. Great read.

Thanks for the comment, Ed. The definition of dystopian (if my memory is right) is imagining going too far down a slippery slope that some people think we're headed and how badly that could turn out. Almost always the slippery slope is something political. I find that I like them because they're much more credible to me than many stories with a horrific plot and they always get me thinking, which they're pretty much designed to do. :)