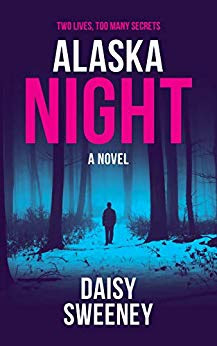 “An arrogant stranger with a mysterious past. An innocent girl desperate to heal her broken family. Thrown together by fate, they find themselves fighting a harsh Alaskan winter. Will they ignore their blistering sexual chemistry or will they give in under the skies of an Alaska Night?

Jules Harper knows that no one comes to Bright Bay in the middle of winter. But one January morning, Night Calloway proves her wrong, riding into the wild woods, ready to break hearts with his chiseled body and grass green eyes. He’s there to make fast money and get away from the dark past that’s been chasing him in the lower 48. If he warms the bed of every pretty girl in town while he does it, all the better. He’s scored logging work with the help of the town’s golden boy and he plans on sweating hard, pocketing the cash and moving on.

Then he sees her.

A sweet-faced local girl raising her little sister, begging her alcoholic father to pick life over death, forced to grow up before her time—the first real emotion Night has felt in years is to protect Jules. But she’s heard the rumors. He’s in town to steal the jobs, and the women. Yet somehow, as soon as he locks his tattooed arms around her, she’s ready to stay in them forever. She doesn’t care that she has no idea who he was before he roared into Alaska.

Just as she falls hard, her world is consumed with dangerous accusations, breathless calls and nightly disappearances. Jules wants to jump to Night’s defense, but when he’s accused of terrible crimes, she doesn’t know if Bright Bay is plotting to bring an outsider down or if she’s really in bed with the enemy. Tangled in a web of lust and law-breaking, Jules knows what her real fear is: When winter ends, will Night disappear with it?”

“Daisy Sweeney is an East Coast girl who loves all four seasons, cozy sweaters, and the endless possibilities of love. She believes a nice cup of tea can brighten a gloomy day that happily-ever-afters always prevail, and is thrilled to be making her New Adult debut with the novel, Alaska Night.

Follow Ms. Sweeney on Amazon for notifications on the continuing adventures of Jules Harper and Night Calloway.”

Honestly, with a blurb like this book has, do you really need to read the book? Well… yes you should. This book is told in first-person POV through Jules Harper, born and raised in this small logging town on a bay in Alaska. She is trying to raise her ten year-old sister, take care of her alcoholic father, take college classes, and hold down a job to pay the utility bills on a small rundown cabin in the wilderness. Jules had to grow up quick when her mother died from cancer when she was twelve. You’ll find a colorful cast of characters well fleshed-out and realistic. The small community on Kachemak Bay will never be the same after Night Calloway rolls into town on his Triumph motorcycle in the dead of winter.

The plot is an emotional rollercoaster ride as Jules’s mood-swings throw you about, but she wants answers. Night keeps his mysterious past a secret. He disappears for days while cutting off all communication. Jules is determined to find out what makes Night tick and uncover all his secrets. When things take a deadly, dangerous turn Jules buckles down and seeks her answers from other sources, and ends up with some surprising allies.

Alaska Night is an impressive debut novel. I didn’t notice any plot holes during this wild ride of twists and turns where small threads could have easily been lost. I was pleased with the ending as well, even with the hopes of a continuing journey for Night and Jules.

A small number of proofing misses such as missing, extra, or wrong words.