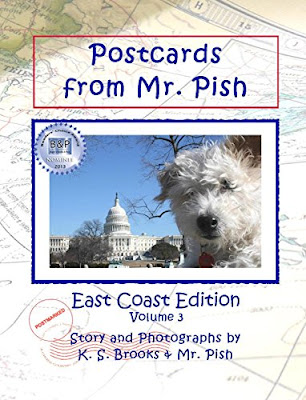 “Mr. Pish, the lovable Jack Russell Terrier, leads readers on an expedition down the East Coast of the United States in Postcards from Mr. Pish Volume 3. With each new discovery, the traveling terrier sends a postcard with full-color photographs and engaging text geared to promote outdoor learning and literacy. Mr. Pish's enthusiasm inspires young and old to read, explore and learn in a fun way. (Fourth book in the Mr. Pish Educational Series, third in the Postcards Series)”

K.S. Brooks has written numerous books in multiple genres including romantic suspense, satire, and educationally oriented children’s books. She is administrator of Indies Unlimited (a multi-author blog “celebrating independent authors”), where you can often catch her pontificating on matters of interest to both readers and authors.

One of a series of children’s books featuring Mr. Pish, the author’s Jack Russell Terrier. This volume tracks Pish’s travels down the heart of the eastern coast of the U.S., from New Hampshire to Georgia. What struck me about the book was how much was going on in what, at first, seems like a simple book. Most pages concentrate on a single stop at a historical site or other point of interest, with a map showing where it is, a post card from Mr. Pish (with a description of what he saw and thought of this stop), and two or three pictures of the site, often including a picture of Mr. Pish sitting in the foreground. It seemed obvious that this book and the others in the series would educate the children who read them in geography, history, and other subjects, while whetting their appetite for travel. They seemed suitable for parents to read to younger children and newer readers, while also being a fast, fun read for children with a few years of reading experience.

When The Princess, my nine year-old granddaughter, read this and gave me her feedback, she agreed with my take. She specifically mentioned liking both the postcards and pictures, along with one item that had slipped past me, a “stamp” on each postcard with a likeness of Mr. Pish, and gave the book a grade of A-. After reading about Mr. Pish, she not only wanted to visit the eastern coast herself, but expressed a desire to meet Mr. Pish. Who knows, maybe someday.
Although this book displays adequately on a grayscale Kindle, a color reader such as a Kindle Fire or computer running a Kindle app is preferred.

Reviewed by: BigAl with input from the Princess

Approximate word count: 23 pages
Posted by BooksAndPals at 8:00 AM