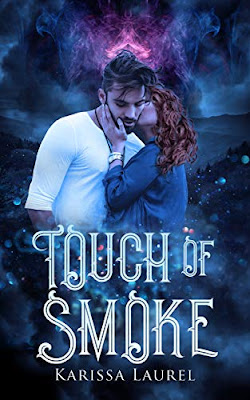 “Three years ago, Rikki Albemarle watched her best friend die at the hands of a supernatural evil. Certain she was slated to be the next victim, Rikki fled her small Smoky Mountain hometown, vowing to never come back. Plagued by nightmares and knowing she's the only one who believes Mina's death was no accident, Rikki returns with hopes of finding answers and holding the killer accountable.

Rikki is convinced the key to unlocking the secret of Mina's death lies with Owen Amir, the alluring young army vet who once claimed her heart. But the deeper Rikki digs into Owen's past, the more she's torn between the urgings of her heart and her memories of him on the night Mina died.

After falling further into the rabbit hole, Rikki lands at the feet of an ancient and powerful evil determined to finish what it started years before. To survive, she'll have to make a decision: believe Owen is the monster she always feared he might be or trust him enough to stay and fight for a second chance at love.”

“Karissa lives in North Carolina with her kid, her husband, the occasional in-law, and a very hairy husky. Some of her favorite things are coffee, dark chocolate, and super heroes. She can quote Princess Bride verbatim. She loves to read and has a sweet tooth for fantasy, sci-fi, and anything in between.”

I have learned that I can trust when Ms. Laurel comes out with a new book, I am in for an excellent story. I could tell by the cover art I was in for a different sort of paranormal element than she had written before, and I could guess what that would be. But, let me tell you I was blown away at the depth of A Touch of Smoke. As the story unfolds the reader is given a dynamic story which jumps back and forth from the last three years to present day. The time warps are clearly marked at the chapter headings, so it’s not hard to stay focused. The leaps back in time are necessary to develop an understanding of each character, which is told through Rikki.

The sexual tension between Rikki and Owen is ratcheted up every time Rikki pulls away. Owen bides his time though, he has the patience of a saint, but the odds are against him. The setting in a small Appalachian town in the middle of nowhere was beautifully described and I wouldn’t mind living there. The town’s people were friendly and all knew each other. However, Rikki had plans to move away to further her education, with no plans of returning. When tragedy strikes and Rikki watches it all unfold, she withdraws and tries to forget about Owen. She’s convinced her dream come true prince has an evil side she wants nothing to do with. So, she concentrates all her energies on starting college and getting further away from Owen.

The twists in the plot are well thought out and enthralling. When Rikki returns home after three years the emotional roller coaster pulls you along by your gut. I wanted things to work out for Owen and for Rikki. Owen has ingratiated himself into Rikki’s hometown and has no plans on leaving. As far as Rikki is concerned she is just there to try to explain her sudden disappearance to her mother, a few close friends, and find closure with Owen, then she’ll be gone again, or so she thinks. However, fate has other plans for her. Owen has tried to protect Rikki from the magic but is he strong enough to protect her when several magical forces unite? Touch of Smoke has a colossal finish you don’t want to miss.