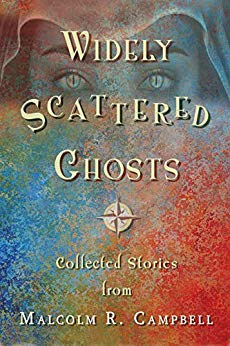 “A readers’ advisory for this collection of nine stories forecasts widely scattered ghosts with a chance of rain. Caution is urged at the following uncertain places: an abandoned mental hospital, the woods behind a pleasant subdivision, a small fishing village, a mountain lake, a long-closed theater undergoing restoration, a feared bridge over a swampy river, a historic district street at dusk, the bedroom of a girl who waited until the last minute to write her book report from an allegedly dead author, and the woods near a conjure woman’s house.

In effect from the words ‘light of the harvest moon was brilliant’ until the last phrase ‘forever rest in peace,’ this advisory includes—but may not be limited to—the Florida Panhandle, northwest Montana, central Illinois, and eastern Missouri.”

He grew up in the Florida Panhandle, a wondrous place often called ‘the other Florida’ and ‘the forgotten coast,’ that was the perfect environment for growing up and learning about writing and magical realism.”

Widely Scattered Ghosts begins with Moonlight and Ghosts: A couple visits an old abandoned mental hospital and development center at night, to quell some troubling dreams. This story draws you in quickly and kept me on tenterhooks until the very end. It had the right amount of tension to be spooky and just enough heart to leave a smile on my face.

Map Maker: Emily is a seventh-grade girl who sees and communes with spirits. She enjoys exploring in the woods behind her family’s house and her territory has expanded to the abandoned ruins of an estate. Her father, Martin (a civil engineer) made her a personal, poster-sized street map of the area and she enjoys adding her own personal touches. The woods behind her house, which the abandoned estate sits on, she has named The Ancient and Sacred Forest on her map. Her father tells her that area is in danger of being bulldozed and sold off as lots for a new subdivision.

Sweetbay Magnolia: Emily is visiting her grandmother, who lives a few blocks away. Granny is missing her almost forever home down by the river. Later that day Emily accompanies her father to an out of town meeting. The conversation between father and daughter is engaging, entertaining, and humorous. Father leaves Emily with the truck and keys to enjoy the river and the dock as he goes to his meeting. It’s twilight and foggy which is ripe for ghosts and spirits who reveal some intimate family secrets about granny’s past. The story is compelling and engaging.

High County Painter: Emily’s family takes a vacation to a mountain resort with a lake and hiking trails. Emily communes with nature spirits and learns a little magic. It’s a little unclear if this is a dream or actually happened. It’s a fun story.

The Opera House Ghosts: This is a hoot of an adventure that includes its own ghost story. Emily’s father is helping with the restoration of an old opera house. So, while he is away with meetings, we finally get to spend some time with Emily’s mom, Sarah, as they explore the old unique theater with lots of history and colorful spirits. Emily is growing into her own, she is fourteen in this story and refuses to take guff from anyone, alive or dead.

Cora’s Crossing: A spirit is awakened on a haunted bridge to aid a young woman. This is a gripping tale with some unsuspecting friends who get lost in the heavy fog. John and Randy end up with quite a tale to tell if they dare.

The Lady of the Blue Hour: A spirit story of a different kind. The story starts out a little puzzling as we are brought up to speed of a spirit running amok. A heartwarming tale of one soul of a tragedy. Don’t tell anyone, but, Kenneth has a little crush on Melinda.

Patience, I Presume: Prudence Lowe is a college student living at home. She needs to read the book she has chosen and write a book report on it which is due the following day. When the blowing snow knocks out the electricity strange things start happening in her room. It just so happens that the author of the book she chose to read used to live down the street and around the corner when she was alive. There is a rumor that the author actually channeled a spirit for her stories. Prudence’s interest is piqued beyond being prudent. The characters are engaging, entertaining, and a little spooky.

Haints in the Woods: This story is told by Lena, mostly. Eulalie is fit to be tied. It shouldn’t take Willie all afternoon to get a quart of milk from the Mercantile. The haints are flying since the graveyard has been relocated. When Pollyanna shows up with a crate full of bridal shower gifts for Eulalie, since there was no bridal shower. While sitting on the back porch, Pollyanna and Eulalie get soused on Eulalie’s best moonshine. Since Eulalie needs a distraction from her anger the crate of gifts turns out to be the perfect solution. The crate and Pollyanna worked its magic, and Eulalie declared Pollyanna down right shameful.

Some of these short stories have been previously published, but are now out of print.