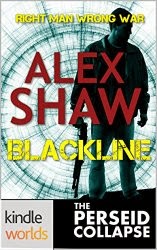 Availability
Kindle US: YES UK: NO Nook: NO Smashwords: NO Paper: NO
Click on a YES above to go to appropriate page in Amazon, Barnes & Noble, or Smashwords store

Alex Shaw was a drama teacher in an international school based in Kyiv until he left to set up his own consultancy business.

Hetman, the author’s first novel, took 12 years to write, subsequently followed up by Cold Black. Both were Kindle bestsellers.

Jack Tate is on holiday, taking some time out in Camden, Maine. He hasn’t been in the country long before he’s taken into custody for a crime he didn’t commit. A local dignitary has been assassinated and Tate fits the description. The local police chief, Donoghue, can’t get the charges to stick however and soon Tate is back on the streets.

But Tate isn’t what he at first seems. He’s actually MI6 and ex-SAS. When he checks into his hotel he’s immediately suspicious of several fellow guests – Russians.

Then the US is attacked by an EMP bomb, knocking out everything electronic. At the same time a tsunami hits Boston, causing huge loss of life. It seems to Tate as if the Russians are in the middle of it all…

Alex Shaw writes taut, fast moving military thrillers. You know exactly what you’re going to get when you pick up one of his books – entertainment at pace. Blackline is no exception. Shaw gets through a lot in a relatively short space of time. There’s intrigue from the first page with the assassination of a retired Senator and the mystery of Tate’s identity.

He gradually builds a relationship with the cops who at first had distrusted him, something that strengthens when the EMP hits and knocks out almost every car, cell phone, television etc.

Tate’s investigations reveal a conspiracy against the US. Unfortunately the novella ends before everything is revealed, presumably this will occur in a follow up. It’s a shame, it would have been good to have seen it closed out.

Tate is a believable character. Tough, yet not over the top. Donoghue is a useful foil. A local cop. Solid and dependable. There’s also Sara, owner of the hotel Tate is booked into. She’s strong willed and sassy. More than a match for Tate.

The one element that needed a suspension of disbelief was the tsunami that hit Boston at the same time as the EMP blast – this was caused by a meteorite strike that no one spotted. Later in the novella it’s explained why, but for a period it was a large question in my mind. Could that really happen?

This aside, Blackline is another entertaining thriller from the pen of Shaw and I look forward to part two.

This is part one of a series.