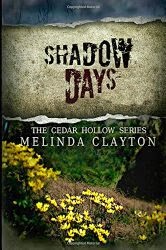 Availability
Kindle  US: YES  UK: YES  Nook: YES  Smashwords: NO Paper: YES
Click on a YES above to go to appropriate page in Amazon, Barnes & Noble, or Smashwords store

Melinda Clayton has an Ed.D. in Special Education Administration and is a licensed psychotherapist in the states of Florida and Colorado. She is the author of The Cedar Hollow Series, Blessed Are the Wholly Broken, as well as the non-fiction guide Self-publishing Made Simple: A How-to Guide for the Non-tech-savvy Among Us.

She is also a contributing author for Indies Unlimited. To learn more visit her website.

“On the anniversary of her husband’s death, forty-nine-year-old Emily Holt runs away, leaving an unmade bed, an unlocked house, two college-aged sons, and an overabundance of bad memories.

Struggling to make peace with the death of a husband who’d been lost to mental illness, she vows to drive to the end of the road, which, she’s surprised to find, is just outside the tiny mining town of Cedar Hollow, West Virginia.

As Emily struggles to redefine and rediscover herself, the good folks of Cedar Hollow are more than happy to help.”

Emily Holt struggles to find her foothold in this installment of the Cedar Hollow series.  Having spent years trying to manage her husband, Greg’s, bipolar manic depression and keep the semblance of a normal life for their two sons, she runs away. On the first anniversary of Greg’s death with her two sons away at college she packs her bags and jumps in the car and drives with no particular destination in mind. She needs a place away from the memories to confront the past. Is it really a surprise that she ended up stranded in Cedar Hollow with car trouble?

When Emily’s sons, at separate colleges, can’t get ahold of their mother by phone they start feeling guilty about not going home for the anniversary of their father’s death. They both rush home to check up on their mom. It’s obvious that she has been gone all week so they file a missing person’s report with the local police in Florida. Riffling through their mother’s desk looking for clues on their mother’s whereabouts they come across their father’s medical files. Zack and Noah learn the truth about their father’s condition and reflect on their mother’s lies for all these years.

This story gives the reader a realistic inside look at what it is like to deal with a loved one who suffers with mental illness. In retrospect Emily begins second guessing herself, did she do the right thing hiding Greg’s illness from her sons? Did she do all she could to support Greg while he was battling his illness? She feels shame, confusion, and guilt. She has completely lost her sense of self. As Emily slowly comes to terms with the consequences of her decisions she made in the past, she is able to open up and make new friends with the residents of Cedar Hollow. Emily soon begins to find solace in this now quaint and quiet little town. She is getting ready to leave her own mark on this town and I think the Sheriff has more on his mind than fishing, but he won’t admit that to himself or anyone else.

This is the fourth book in the Cedar Hollow Series, it includes a guide for book club questions at the end of the story. As a Bonus there is also a short story added after the questions. Spirit of the Mountain: A Word from Billy May, I enjoyed this little addition. It was nice to hear from Billy May again. She left an indelible mark on this town and she keeps an eye on her people still.

Really looking forward to reading...and hearing from Billy May again!

IKR? It's not long, but I dearly love Billy May. She sets up the whole foundation that the series grows from.

Thanks for stopping in and commenting, Ms. Boris.