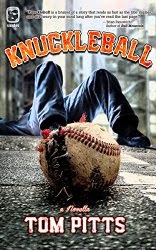 Hugh Patterson is an old-school cop and die-hard Giants fan rooted in the San Francisco Mission District. When he's struck down in the line of duty, the whole city is aghast. But Oscar Flores, a 15-year old Latino boy obsessed with baseball, witnesses the gruesome crime and has a plan to assuage the city’s grief and satisfy his own vision of justice. Against the backdrop of a weekend long series with the Dodgers, the gripping crime story plays out against the city's brightest monuments and darkest alleys.

Tom Pitts delivered one of my favourite novels of 2014, Hustle, so I was looking forward to reading his next work. Knuckleball has some similarities, some differences.

In the former camp, it’s fast moving, hard-hitting, noir-laden with character driven action and cracking dialogue. In the latter it’s shorter (being a novella) and has sport as a backdrop, rather than drugs.

The prime characters are the murdered cop, Patterson (although it could be argued he’s more of a prop), his partner Alvarez and the kid, Oscar.

Oscar doesn’t live a great life. His mother is rarely home, she works hard to keep the kids fed. When she is around she’s too tired to interact. His brother, Ramon, is a sadist. Rather than looking out for Oscar he gives him hell, a situation Oscar will do anything to get himself out of and when he witnesses the murder a plan comes to mind, but can he get away with it?

There’s only one negative with Knuckleball, it’s too short, but that’s the thing with novellas. I’d like to have read more about Oscar and the finale opens up the potential for further events to occur. But nevertheless this is an excellent story.