Of Blood and Sorrow / Christine Rains 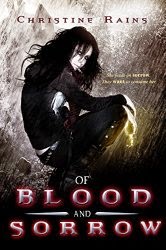 Availability
Kindle  US: YES  UK: YES  Nook: YES  Smashwords: YES  Paper: NO
Click on a YES above to go to appropriate page in Amazon, Barnes & Noble, or Smashwords store

“Christine Rains is a writer, blogger, and geek mom. She's married to her best friend and fellow geek living in south-central Indiana. They have one son who is too smart for his parents' own good and loves to pretend he's Batman. Christine has four degrees which help nothing with motherhood, but make her a great Jeopardy player. When she's not reading or writing, she's going on adventures with her son or watching cheesy movies on Syfy Channel. She's a member of Untethered Realms and S.C.I.F.I. (South Central Indiana Fiction Interface). She has several short stories and novellas published.” This is her first novel.

When fledgling vampire Nicolas Reese comes to Erin for help, she learns the truth behind the legends and hides him from his sire and the vampire hunters who seek him. But when the Putzkammers begin to die one by one, Erin is caught between her act of kindness and the need to save her adopted family. Only by facing her own personal demons can she stop the slaughter and still rescue Nicolas from his dark fate.”

I enjoyed this story about an insecure demon and a fledgling vampire who isn’t sure how to be a vampire. Erin Driscol was raised with an overbearing and abusive mother. She has found a new family with the Putzkammers and her job is an excellent fit for the type of demon she is. Erin is known a Phage demon, who feed off people’s sorrows, she is always careful not to take all of their sorrow away. Usually just enough to help those who have lost a loved one to be able to cope and move forward. Erin fears she may one day become like her mother and drain people until they are an empty shell, and this haunts her.

When Nicolas awakens in the morgue one evening while Erin was working late all she really wants to do is get him out of the morgue. Once he is out of the morgue she starts feeling guilty about unleashing another vampire into the world. But Nicolas is not like other vampires, and when Erin sees this she does her best to protect him. Hessa, Nicolas’ sire, wants her new boy toy back. She is as evil as she is beautiful and has a plan that will devastate the demon community and leave the vampires in control.

Ms. Rains has done an excellent job building her fantasy community into our own world. Which is kind of creepy when you start thinking about the possibilities. Her characters are well defined and original. The plot moves quickly with several twists and turns I didn’t expect. It was hard to put the book down during confrontations and showdowns. If you like urban fantasies with original interesting characters who grow into their strengths, you will likely enjoy this story. I know I did.

Thanks so much for the great review. I'm happy you enjoyed it!

Thanks for dropping in and commenting, Ms. Rains. I hope to see a series come out of this story.