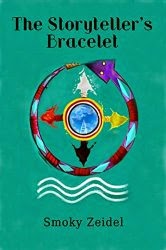 “It is the late 1800s, and the U.S. Government has mandated native tribes send their youth to Indian schools where they are stripped of their native heritage by the people they think of as The Others. Otter and Sun Song are deeply in love, but when they are sent East to school, Otter, renamed Gideon, tries to adapt, where Sun Song does not, enduring brutal attacks from the school headmaster because of her refusal to so much as speak. Gideon, thinking Sun Song has spurned him, turns for comfort to Wendy Thatcher, the daughter of a wealthy school patron, beginning a forbidden affair of the heart.

But the Spirits have different plans for Gideon and Sun Song. They speak to Gideon through his magical storyteller’s bracelet, showing him both his past and his future. You are both child and mother of The Original People, Sun Song is told. When it is right, you will be safe once more. Will Gideon become Otter once again and return to Sun Song and his tribal roots, or attempt to remain with Wendy, with whom he can have no future?”

I have to admit, I am partial to Native American themed stories. I appreciated the way Ms. Zeidel wove the tribal belief systems and symbols together to include all Native American people. Their connectedness to Mother Earth and sense of community is something I can identify with. This story depicts a history that has been excluded in United States history school books of the atrocities that Native American youth endured at the hands of the Others, the White Man. They were forcibly removed from their families and taken to schools far away from home to teach them how to assimilate into the white mans’ world. They were stripped of their native attire and names given to them by their parents. The school assigned everyone an English sounding name, handed them English styled clothes, and hard leather shoes. They were taught English and not allowed to use their native language. The male children were given haircuts and taught a trade. The girls were not allowed to braid their hair and they were taught housekeeping, gardening, and other menial jobs. More or less they were being taught how to be slaves for the Others.

Sun Song/Susan tried her hardest to hold onto her native roots, she was a storyteller at heart. Otter/Gideon was able to see some benefit in knowing the English language, which would make trading with the white man easier, for the tribe as a whole. He is a storyteller also, but tells his stories on silver with pictographs and tribal symbols. This is their story. Both are seventeen and see themselves married in the future. Little did they know what was in store for them both in the world of the Others. Although, Sun Song had a clue after watching her brother’s transformation upon returning from his schooling back East. As with all school systems there were a few good teachers who had compassion for the Native American plight. However, their hands were often tied and unable to change the system as a whole under the current administration.

The different storylines were easy to follow and woven together seamlessly. Sun Song and Otter were not allowed to socialize, even in the dining hall. With the third person perspective we are able to see Sun Song’s journey as well as Otter’s. The story is told with sensitivity and compassion. There are many twists in the plot that complicate matters and a few magical moments that had me in awe. I would recommend this book to anyone who enjoys Native American tales. Ms. Zeidel’s prose is easy to read, highly descriptive, and inspiring.

I was given an advanced readers’ copy for an honest review so I can’t gauge the final product in this area, although my copy was very clean.