The Secrets of the Universe / Noah K Mullette-Gillman 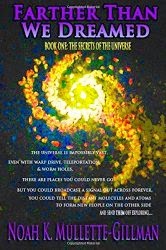 “Noah Mullette-Gillman was born in Montclair, New Jersey. He spent his childhood there, as well as in the town of Manly, Australia, and the woods of Upstate New York. He earned a multidisciplinary degree in Philosophy and Creative Writing at Bard College in Annandale-on-Hudson, New York.”
Mr. Mulletter-Gillman is also the author of Luminous and Ominous, The Dead Have Ruled Earth For 200 Years, Magic Makes You Strange, The Confessions of Zeuspater, and a mythological short story The White Hairs.

One day he was ripped out of his life, away from the woman he loved, and woke up in the far future, the captain of a spaceship/moon on the other side of the cosmos. His crew is made up of twelve of the greatest artists, scientists, and leaders of the next eight hundred years: The doctor who invented the Martian race, the Queen of the British Corporation, a Chinese cyborg-warlord, an eight foot tall Australian Aborigine, a post-human physicist covered in white fur.

Together they must understand why they are there, explore the galaxies, explore reality, and come to grips with the results of lives they don’t even remember living.”

This story starts off with Charlie Daemon having a very bad day to say the least. This causes Charlie and Dr. David Aelfwyrd to have a troublesome relationship that brings up some questionable ethics surrounding the Doctor. As the story unfolds we learn about each of the twelve crew members through flashbacks exposing their pasts. They are a little jarring at first because they seemed to throw me out of the story. However, they are well-marked by dates and provide needed details.

Mullette-Gillman has built an elaborate world with epic characters. The crew is made up of a hodge-podge of individuals that each have expertise in different areas. If you are not willing to invest thought and attention to the characters then this adventure through time and space may not be a book for you. They thought they knew their mission but questions have been raised that no one has the answers to. Who knows how long they have been up there goofing off, just having a great time with all the amenities of the rich and famous. At times it all seems like a dream.

Each episode explores a new world or area of their fantastic world ship. Each adventure they gain new knowledge about themselves and the universe around them. The plot moves at varying speeds and there were twists no one could have predicted. At times it is exciting, at other times is harrowing and devastating. Science Fiction is not generally my preferred genre so I did feel out of my element with this story, but I found it thought provoking. Give it a try and tell me what your thoughts are.

The Secrets of the Universe contains episodes 1-4 of the Farther Than We Dreamed saga: Clay, Waves, Crystal, and Cosmic Shag.

A small number of typos and other errors.