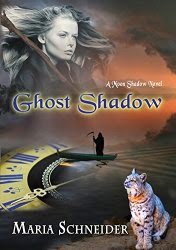 Availability
Kindle  US: YES  UK: YES  Nook: YES  Smashwords: YES  Paper: NO
Click on a YES above to go to appropriate page in Amazon, Barnes & Noble, or Smashwords store

Author:
About Maria Schneider: “I grew up in New Mexico where the desert environment inspired me to embellish the landscape with my imagination. After working in the computer industry for twelve years, I decided technology moved too slowly and again put my imagination to work, creating messes and then inventing characters to handle all the clean-up. If only that worked on the dinner dishes!

I currently reside near Austin, Texas with my husband. My partners in crime are Junior the cat and his feral mom, Scamper. The beautiful horses belong to my parents and really, they are hardly spoiled at all!”

Learn more about Ms. Schneider and her other books at herwebsite or friend her on Facebook.

“Shadow is stuck In Between...dead, but not gone. Martin insists she isn’t dead and doesn’t belong here, but as far as she can tell, the trip was a one-way ticket. She can’t even remember her real name or how she ended up here.

In Between is dangerous enough without wasting time peering through the weave at the living and dreaming of what might have been. Of course, if Adriel, the witch, and Lynx, the cat, insist on trying to help her, she can hardly refuse to meet them at the edge. But if magic can’t locate her living body, how can one stubborn cat achieve the impossible? Does enough magic really exist in the world to bring her back over?”

What a rollercoaster ride this book is. The story centers around the mystery of Shadow. She has no memory of her life before arriving at In Between. The In Between is a sort of limbo where spirits live if they don’t go straight into the light because they have unfinished business on earth. Ms. Schneider painted the picture of In Between with descriptive prose and outlined the rules of the space that contains displaced demons and otherworldly nightmare creatures as well as ghostly spirits. Demons who wish to possess humans try to claw between the weave that separates In Between from our world.

Lynx, a recurrent shifter in the Moon Shadow Series, is determined to find Shadow’s not-quite-dead body and help her cross back into the land of the living. Shadow is insistent to help a sick little girl she can speak with through the weave and a couple of fellow ghost friends who are stuck In Between with her. She seems to be everyone’s caretaker. She is a good soul.

Ms. Schneider does an excellent job merging all the story lines into one cohesive story without losing track of any details. There are also a few fight scenes that are well written, highly descriptive and well-choreographed. I could see and feel the action. This is an entertaining, thought provoking Urban Fantasy with a touch of romance. I would highly recommend this unique story to who enjoys paranormal or urban fantasy. Lynx gets a lot of attention in this book. He has to be one of my favorite characters ever.

Ghost Shadow is Book 4 in the Moon Shadow Series. I believe it is possible to read this as a stand-alone. The reader is given a minor overview of the characters in the prologue. Of course for a more in-depth understanding of the characters the whole series should be read first.

No significant errors in proofing or formatting.