Review: Democracy On The Edge by @TerryAAmrhein 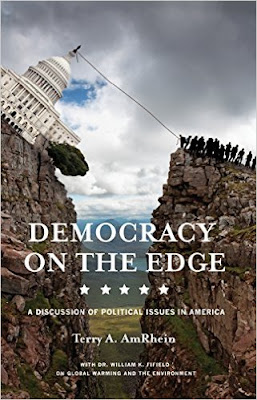 Genre: Non-Fiction/Politics
Description:
The author explores a number of landmark events in U.S. government and judiciary history that have induced such upheavals as runaway spending on political campaigns and financial deregulation that lead to the subprime financial crisis and continues to threaten stability.
Author:
Terry A. AmRhein graduated from the University of Virginia with a Bachelor of Science degree in physics. He “was raised in a family that was very interested in political discussion. As a youth, I used to sit around the kitchen table and listen to ‘grown-ups’ discuss the cold war, business, unions, and communism. I think it is natural then that I continue to have an interest in politics.
I have published one other book, The Newcomers Guide to Winning Location Elections, and live in Vermont with my wife. I have two children and three delightful grandchildren.”
Appraisal:
AmRhein is the quintessential citizen scholar, an engineer and scientist gifted with common sense and lucidity that seems to have escaped some of the nation's Supreme Court justices and legislators.
With campaign spending in the current presidential race expected to exceed $1 billion, the chapter on Super PACs is particularly timely. AmRhein details how in 2010 the Supreme Court overturned a century of controls on political spending and gutted the McCain-Feingold Act intended to curb the influence of moneyed interests.
The vote in the Citizens United case was five to four, with an impassioned dissent against applying the rights of free speech to corporations and other organizations including the freedom to spend limitlessly to influence political outcomes. The author sides with the dissent and suggests a simple remedy.
Chapters on Business in America and the Financial Crisis provide painful evidence that when freed from the constraints of governmental oversight, enough business folk and financiers will put greed ahead of the common good. The author details how deregulation that overturned the Taft-Hartley Act separating commercial and investment banking led to the 2008 financial crisis. Despite implementation of the Dodd-Frank act, intended to restore order, the author writes that mega financial conglomerates are actually gaining market share.
AmRhein takes shots at deniers of global warming and opponents of gun control and universal health care. He also provides extensive data showing that supply side economics really is "voodoo" that gives the mojo to the massively wealthy at the expense of a declining middle-class. Tea Party "logic" takes a hit along with anyone comfortable embracing mutually contradictory opinions.
The book presents complex issues in clean simplicity and provides extensive sourcing for anyone interested in pursuing further study.

Buy now from:            Amazon US        Amazon UK
FYI:
While I highly recommend the work, there were a few areas that I consider problematic, including the carelessly written:
"In other words, by using the Federal Reserve Bank, the government can adjust interest rates to increase economic growth."
The Fed, of course, conducts monetary policy, including interest rate adjustments on its own initiative, not at the behest of government.
The author also suggests it would be a good idea to ban tobacco products in the U.S., which might do more to enrich criminal elements than to reduce usage. Prohibition didn't work, after all.

Format/Typo Issues:
There are a plethora of errors in syntax, grammar and spelling, such as the cringe inducing "Social Society Administration" instead of Social Security.
Rating: **** Four stars
Reviewed by: Sam Waite

Posted by BooksAndPals at 6:49 AM