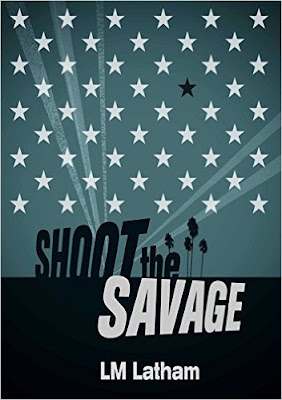 I, ?wazithinkin, have made an executive decision to accept a Guest Review. I am honored to post BigAl’s Books and Pals first ever Guest Review from indie author, Marion Stein. Please check out BigAl’s reviews for her books: Schrodinger’s Telephone, Loisaida – A New York Story, and Blood Diva. You can read her snarky television reviews and recaps at Happy Nice Time People, and find her books on her Amazon author page.

Author: LM Latham is a UK-based writer who made her literary debut with Shoot the Savage, which was recognized as a  “Self Published Book of the Month”  by The Guardian in September 2014. Latham has more recently published a second novel, Solitude of Night.

Los Angeles, 1936, everyone wants to be in the movies. Handsome, young “shoeshine boy” Eli Samson gets his big break when he's plucked from the sidewalk to play a “native” in a Hollywood B picture. Eli is then cast in more roles, playing a succession of slaves, servants, and “savages.” While he enjoys the glamour and the easy money, he must eventually confront the limitations of segregation and the fact that his roles only perpetuate stereotypes.

There's much to admire in this Hollywood coming of age story. The novel is very well researched, and the writer made the setting and descriptions of African American life on the outskirts of Hollywood in 1936 feel authentic. The writing is consistently good, but never soars. While the setting is highly original, and the author seems to get so many details right, the plot itself is in many ways old-fashioned. It really is a coming into adulthood story with Eli growing considerably more worldly, and in some ways disillusioned in a short amount of time.  There's a romantic subplot involving his ambitious beautiful girlfriend, Belle, that feels predictable and clichéd.

Exploring old Hollywood through African American eyes is a brilliant idea. I just wish the execution had been a little more exciting. Some of the characters are clearly based on real actors. There was an easily recognizable “political” Paul Robeson stand-in, and a highly successful at playing maids Hattie McDaniel type. While it's fun for old movie buffs to recognize the cameos, those characterizations lacked depth.  From the clever use of the word “shoot” in the title, I expected more irony and maybe surreal humor, but there's really little of that. Eli was almost too perfect, too likable, too nice, as were his mother and brother.

This is the only novel I can think of about this subject, and if you're interested in old Hollywood you'll probably like it. There's no profanity or graphic sex if those are things that offend you. The book manages to put Eli through a tough time, but it ends on an upbeat but not unrealistic note.

While it was entertaining, enlightening, and well-written, I just wish it had a little more depth. This is a case where I can imagine that if it had been picked up by a major publisher – which it should have been – the writer might have been pushed harder by an astute editor to go deeper and maybe even darker.