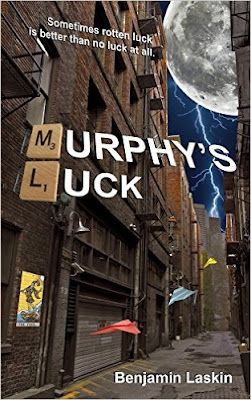 Description:
“Master of a thousand hobbies, but jinxed from birth with horrendous luck, Murphy Drummer has developed some eye-popping abilities. When Murphy goes in search of a luck-free zone where the world might be safe from his puzzling disorder, charmed Joy Daley stumbles into his whammy-charged path. Churning out both miracles and mayhem, Murphy whimsically upends the lives of everyone in Joy's life.

At first, Murphy's victims question who he is; at last, they'll be questioning who they aren't. A comical love story of wood-tapping proportions.”

Author:
“Benjamin Laskin grew up in Phoenix, Arizona. He has traveled extensively and lived in a number of countries, including many years in Hamamatsu, Japan, where he taught English and wrote. Benjamin can now be found sauntering through the maze of narrow, stony alleyways in the ancient and legend-rich town of Safed, in Israel's upper Galilee, where he is currently at work on his next novel.” For more information, please visit Mr. Laskin’s website or stop by his Facebook Author page.

Appraisal:
I don’t read a lot of Literary or Speculative Fiction, however this was fun. It included just enough fantasy to keep me interested and the wordplay was entertaining. Poor Murphy feels like he is cursed and he has separated himself from society as much as possible for what he perceives as the greater good for all concerned. He has built his own sanctuary in and around his house. He fills his time learning new hobbies and writing about them in his syndicated newspaper articles. He also corresponds with his readers. When his devoted grandfather, who raised him from infancy, passes away he sees no other choice than to quit his job and move to an even more secluded environment. Of course he doesn’t make it very far before disasters start happening around him again.

The sequence of events and characters introduced into the storyline are unique but not out of the ordinary. They are all much more realistic than any of Murphy’s neighbors were in his old neighborhood. (They were all a lot of miserable people looking to place blame on anyone besides themselves for their misfortunes.) When Joy Daley, a journalist, encounters Murphy, she is intrigued and puzzled by what she sees happening around him. Joy is unlike anyone Murphy has ever met and he isn’t quite sure what to make of her. However, he finally accepts her kindness, and Joy is able to slowly bring a fresh perspective into Murphy’s life.

I loved Joy and Murphy's journey as much as I relished the well-developed secondary characters of Brock Parker, Joy’s straight-laced police detective fiancé, and the misty-eyed tarot card reader Freya who states, “The Universe works in mysterious ways…” as Brock’s world is turned upside down. I found this a relatively quick, light read with skillful levity in all the right places.

FYI:
A small amount of adult language, hardly worth mentioning.

Posted by BooksAndPals at 9:22 AM