Better in the Morning by @FernRonay 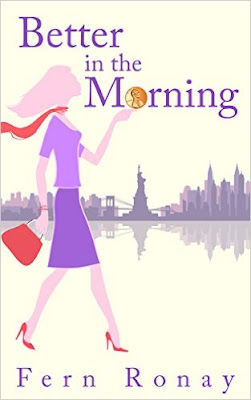 Description:
“Veronica Buccino has a plan: marry John DelMonico and quit her soul-sucking job as a lawyer. And when he tells her he has big news, she’s certain he’ll pop the question. But instead of proposing, John informs her that he’s moving to London.

Heartbroken, Veronica feels lost. Salvatore and Antoinette, her dead grandparents, begin to visit her dreams in an attempt to steer her in the right direction. At their suggestion, Veronica takes a news reporting class, which leads to a challenging freelance assignment covering a conspiracy trial. She also begins dating an unlikely suitor: creative Syd Blackman.

Just when her love life and career are looking up, Veronica is tossed back to square one by an event that makes her question all her new choices.”

Author:
“Fern Ronay was born and raised in Belleville, New Jersey. She is a lawyer and CPA as well as a writer, reporter, and blogger. After six years in Manhattan and six years in Chicago, she now lives in sunny Los Angeles with her husband.
In addition to writing novels, Fern authors the blog Stop and Blog the Roses and is a co-host on AfterBuzzTV. When she is not writing, reporting, or blogging, Fern can be found eating something, reading something, or running”
Learn more about Ms. Ronay at her website, her BLOGHER site, or follow her on Facebook and Twitter.

Appraisal:
I have to admit it took me a long time to get into this story. I had a difficult time liking Veronica. She hated her job, disliked her employer and her co-worker, Kate. Veronica carried a disdain for her work and put forth very little effort in researching or filing cases she was given. She viewed it all as soul-sucking work, which it really was for her. Except for one case that involved Tristen Hines. The firm actually represented Pat Stephens who was suing Tristen for damages she was responsible for. Tristen was able to connect on a human level with Veronica, an element Veronica had been sorely missing in her work. As this part of the storyline played out, Veronica becomes more likeable as she is fraught with obstacles trying to do what is best for both parties of the lawsuit.

After John leaves Veronica to pursue his career in London we start to get a look at the real Veronica outside of work. At the encouraging help of her two friends and her dead grandparents, Veronica signs up for an online dating service. Rounding out her evenings, she also signs up to take a news reporting class. I liked the way all these elements are woven together into a realistic human interest story – communing with her dead grandparents aside. Antoinette and Salvatore, Veronica’s grandparents, were fun to have around. They guided and encouraged Veronica to stretch her wings and seek different things that would make her happy with her life. They helped by pushing her out of her comfort-zone.

In the end, I enjoyed reading about Veronica’s journey through all the conflicted emotions she was forced to deal with. I think this will make a great beach read or book to take on a summer vacation.

Format/Typo Issues:
I was given an advanced readers copy to review, however, I found the editing was excellent. 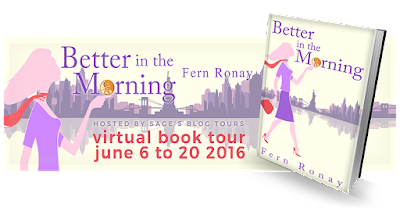 Thank you for reading Better in the Morning.
Sweet dreams & signs,
Fern Ronay

You're welcome, Ms. Ronay. Thanks for stopping in and commenting.