Caught in a Trap by @ElaineRaco Chase 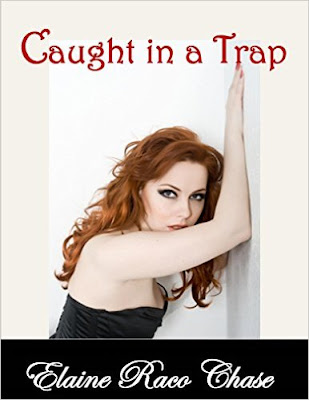 Description:
“Kit Forrester lived a life of lies - so what was one more? When her first vacation ever sank like the Titanic - she couldn't tell her friends THAT! So she did what she always did - she lied. Kit told everyone about her fabulous five day cruise. Her days of fun in the sun and moonlit nights with the man of her dreams - Rafe Morgan - tall, handsome, incredibly sexy and successful. And well - now they were engaged!

Retired Navy SEAL and Texas business tycoon, Rafe Morgan was sure he was being set up by his suddenly acquired fiancée. He had spent 20 years in the Navy and was trained to handle anything - until he came up against one volatile New York redhead with wicked curves and the world's hardest ass!

Then he saw her sex lair and was more than willing to be Caught in a Trap. And to set one of his own!”

Author:
“Elaine Raco Chase is the award-winning author of sixteen novels with over 3 million books in print. She is published in 25 countries and 15 languages. As a romance writer, Chase has won two sales awards for top romance novels of the year, Romantic Times Lifetime Achievement Award for romantic suspense, and the Affaire de Coeur Silver Pen Award for writing excellence. Her non-fiction debut Amateur Detectives - A Writer's Guide was nominated for the prestigious Agatha Christie Award. Elaine was past President of Sisters in Crime International, a charter member of Romance Writers of America and a registered lecturer for Poets and Writers. She currently teaches a variety of writing courses.”

Please check out her website for all the books in her catalog and feel free to stalk her on Facebook.

Appraisal:
I found this story a thoroughly enjoyable journey through miscommunication and false assumptions before you have all the facts, while struggling through a quagmire of insecurities. Kit Forrester had survived a horribly abusive childhood and was well on her way to moving forward with her life, working in the account purchasing department at Shippley Electronics in San Antonio, Texas. She moved there eighteen months ago from New York to start a new life after years of therapy and putting herself through school.

Rafe Morgan was a wounded Navy SEAL who struck it rich when he purchased a rundown ranch in which to build a new future. Every time he dug a new well looking for water he would strike oil. Being a good-looking bachelor he was a prime target for every socialite in Texas. This included Mr. Shippley’s, from Shippley Electronics, two beautiful gold-digging daughters. Rafe had been able to start many new companies and develop an impressive, diverse portfolio with his newfound wealth. He has learned to be wary of beautiful women, but Kit doesn’t consider herself beautiful. She was practical and down-to-earth, always looking out for and taking care of all of her friends’ best interests before her own. Rafe was sure she had set a trap for him and was not going to let himself fall for any of her tricks. Rafe followed the age old adage: Keep your friends close, but your enemies closer.

There is no denying Rafe and Kit had steamy chemistry, no matter how many times both of them fought it. Rafe had the patience of a saint. I tired listening to all of Kit’s inner insecurities and self-admonishment. This of course led us on a comedic roller-coaster ride of emotional errors. However, to Kit’s credit, none of these insecurities affected her business acumen. She was smart, confident, and well spoken; however, her personal life was still an emotional mess, despite years of therapy.

Caught in a Trap is a fun, steamy read with well-rounded enjoyable characters. It is not a quick read though, it is an in-depth journey into the lives of both Kit and Rafe. I can almost guarantee you will want to slap some sense into Kit a few times, bless her heart. But at the same time you will love her because she has a good soul that had survived atrocities and Rafe will scald your sensibilities. Although I wanted him to shave his mustache.

FYI:
“Content Warning - this book is intended for mature adult readers (18+) who are not offended by profanity and explicit sex scenes. While this is a romantic comedy, some readers may find some subject matter difficult - unfortunately such events are true.”

“Spoiler alert: please be advised that no comic books, superheroes, duct tape, handcuffs, ropes or organic chocolate milk were harmed during the writing of this novel.”

Actually, I am not sure whether no organic chocolate milk was harmed in this novel. There was plenty consumed, however, I don’t recall any being spilt. So, perhaps that is a judgement call?

Posted by BooksAndPals at 11:42 AM

Loved this book!!!it had everything you look for in a book filled with romance and comedy!! Elaine's books never disappoint!!!

I hope to review more of Ms. Chase's books in the future. Thanks for dropping in and commenting Carol Lilla.