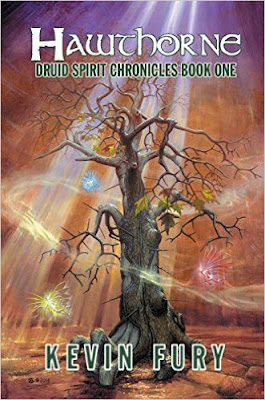 Description:
“Can a Druid’s apprentice, a renegade skinwalker, and a Celtic prince find the strength to defeat a goddess of death and war? What secrets will a hidden faerie world reveal? What sacrifices must be made? Who will die?”

Author:
“Kevin Fury grew up in Michigan and Florida, but you could equally say he grew up in Tolkien's Middle Earth and C.S. Lewis's Narnia. From the first time he walked through the wardrobe into Narnia, he knew he loved fantasy fiction. It allowed him to dream of bright places and also of the dark and mysterious. After finishing his English degree, he moved to Colorado and worked for Barnes and Noble. He managed four Barnes and Noble stores over fifteen years and during that time he worked on his novel, Hawthorne, hoping to one day have his own work on the shelves. He lives with his family in Denver and is now dedicated to working full time on writing.”

Appraisal:
Rhiannon O'Neil, Druid apprentice, lives in fear of the fae who have killed all but her and her uncle, Brennan. Brennan has been tutoring Rhiannon in the Druid healing arts, but there is much he hasn’t taught her. When her uncle disappears from his home in Ireland, Rhiannon enlists her Native American fiancé, Logan, to help her. However, Logan carries a secret burden with him which he hasn’t shared with Rhiannon. Logan’s secret turns out to be far larger than even he was fully aware. On their first night in Ireland, Logan disappears. Rhiannon now has to rescue Logan from his fae captors and find her uncle, who she’s not even sure is still alive.

Mr. Fury has woven an epic adventure that includes at least three different main story arcs that splinter along the path before rejoining the arc again. His fantasy world is amazingly detailed and his characters are well rounded with distinct personalities. Rhiannon is a strong female heroine who is plagued with insecurities, but she finds her strength when she has time to center herself. This isn’t always easy for her to do because a lot of the action comes fast and furious where snap decisions must be made. She is often pitted against egos that are much greater than her own as well. Luckily, proving her integrity, she is able to make a few interesting fae friends who are able to assist her on her quest.

The story-line takes several surprising twists where tough decisions must be made. Mr. Fury did an excellent job weaving all of his threads together for a dramatic conclusion. The battle scenes throughout are all graphic and captivating. While this story is far from over the most important story arc was brought to a satisfying close. There are still hardships to confront, responsibilities to address, and relationships which could prove troublesome.

From what I could learn about the author, Kevin Fury, Hawthorne seems to be his debut novel. He takes an elementary approach to Celtic Mythos, if you are new to Druid mysticism, The Sidhe, or The Fae, this is a good book to become familiar with their basic truths and beliefs.

Now, I am going to get nit-picky. I am giving Hawthorne a four star rating because the author did a great job keeping the big picture in order, which is hard to do with such an epic story. However, I found two small inconsistencies that did throw me out of the story momentarily. The first was when Fao, the wolf, followed Rhiannon out of the cave (chapter 11) who was following Tinurion. He then reached down and stroked Fao’s head. A page later Fao woke up, stretched, and walked over to sit next to the Tinurion. The second was when Rhiannon shed her cloak in the raging water because of its weight (chapter 33) and in the next chapter she is pushing up the sleeves of her robe. These were small and had no real bearing on the story whatsoever. I wanted to warn Mr. Fury to keep an eye on the small details as well. A good line editor should have caught these. Despite these issues I would recommend this epic fantasy that mixes Celtic mythos with Native American myths and look forward to the next book.

Format/Typo Issues:
I came across a few proofing issues that could use some attention. Mostly missing, extra, or wrong words, but they didn’t throw me out of the story. These could have been addressed before publication, but I have to review the file I was given.