Wrong! 101 Reasons Why You Should Never Listen to Anyone by G.R. Howard 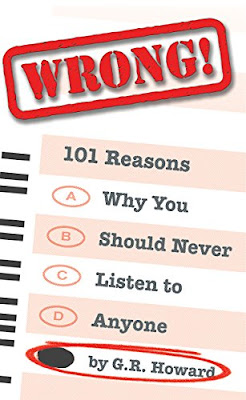 Description:
"If you're needing inspiration, read this book!

Every significant scientific advance became manifest amidst an audience of naysayers. Every person who ever amounted to anything, every dedicated dreamer, every doer, every person who was set on accomplishing something of importance or uniqueness, did so around people who said he or she couldn't do it. Every one of them.

Whether it were friends, family, colleagues, or the 'experts,' there was always somebody, and more often than not a chorus of somebodies, who said 'it' couldn’t be done.

"G.R. Howard is Georgian by birth, and currently living in Dallas by way of Los Angeles and Portland. A proud graduate of the Grady College of Journalism and Mass Communication at the University of Georgia, this is his first book. When not writing and earning a living, he spends most of his time with two old convertibles and his much-beloved 1964 Vox amplifier."

This book consists of a series of short chapters, each of which starts with a naysaying quote about something or someone. For example, Bill Gates saying “there's no money to be made there” in regards to the Internet. As the book's title makes clear, those people were Wrong! The remainder of the chapter explains what really happened in each case.

Every significant scientific or technological advance became manifest amidst an audience of naysayers.

That line from the forward of Wrong! summarizes the point the author hopes you'll take away from this short book. The point is that those who accomplish great things do so by believing in themselves and not giving up, regardless of what the naysayers think.

Posted by BooksAndPals at 7:19 AM

Email ThisBlogThis!Share to TwitterShare to FacebookShare to Pinterest
Labels: 4 Star, GR Howard, Non-fiction, Wrong! 101 Reasons Why You Should Never Listen to Anyone