Wolves Among Men: The Saga of Wolves by Penelope A. Sweet 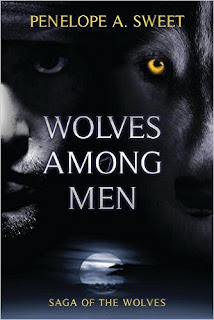 Description:
“After the death of their parents, Ethan Harlow and his sister do their best to pick up the pieces and live a normal life, but after an attack that leaves Ethan in the ICU, their lives quickly become anything but normal.

After Ethan notices strange changes in himself, he sets off across California to find an answer, a name for what he has become. Unfortunately what he finds is far worse than anything he could have imagined. A centuries old evil waiting to return, a race of creatures that shouldn’t exist and war Ethan never meant to start.

With the help of his new friends and the woman that made him, Ethan must make a choice…

Will he run for his life? Or stay and fight at the side of the wolves that have become like a family to him?”

Author:
“Penelope A. Sweet is a lifelong believer in magic and monsters, and it’s this belief that drives her to search within the shadows for the darkest of tales. A lover of all things horror and all things macabre, Penelope’s passion is to bring you the stories that send chills down your spine, keep you awake in the night and most of all keep you coming back for more.”

Appraisal:
It is hard to know where to start with this review. I am generally a lover of shifter stories and in the beginning I felt like this one had potential. Perhaps with a good copy or line editor this novel could turn into a great story. First thing I would do is tone down the wimpy main character, Ethan. I almost wanted to throw my Kindle against the wall if I read the line “I wish I understood what was going on” or knew what was happening or similar statements. Honestly, I could understand his confusion without having to read those words over and over again throughout the entire story! The poor boy was not very smart, but I could have dealt with him being a wimp. However, the problems escalated when his dialogue was always chuckled. Not only his but most of the other characters chuckled their lines as well. Should I add here that this is not a comedy? I didn’t feel like the chuckling dialogue lightened the mood either.

Another fact that didn’t sit well with me was that Ethan’s maker abandoned him after changing him. She left him on his own for a good three months for him to deal with his “change” on his own. Later we learn his maker, Sam, is over two hundred years old and was now the leader of her own group that was made up of other lost ‘pups’. How much sense does that make? I felt that was totally nonsensical and I couldn’t justify that in my head at all. It is little wonder that Ethan caused the problems that escalated this story to a war between two totally different werewolf clans that ran on different philosophies. This was a unique story idea that ran into problems without a proper editor, story critique group, or beta readers who are not friends, to guide the author.

These applied elements would have also helped with proofing errors I encountered. Several were missing or wrong words such as there/they’re, read/red, wondering/wandering, thought/though, and gentile/gentle, but the most disturbing for me was Matt being spelled out as Mattes too many times to mention. Once he was even Mat.

So basically I felt there was a good story in all the words, somewhere. Several twists give the book a nice pace. Also, the characters are interesting and diverse. The story needs some work to reach its full potential though. I should also mention Wolves Among Men ends in a cliff-hanger, but the good news is that book two, Unleashed, is now available.

FYI:
Wolves Among Men is the first book in the Saga of Wolves series. Book two, Unleashed, is also now available. Only two F-bombs were dropped.

Format/Typo Issues:
Way too many proofing issues for anyone’s comfort.