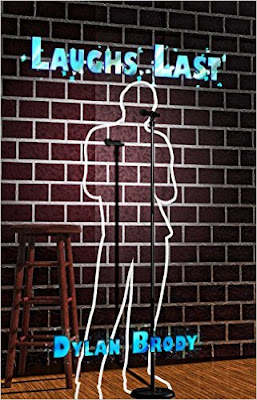 Description:
“Laughs Last is a rumination on family, legacy, talent, and the fluidity of time, a poignant dream of adulthood coming in fits and starts to our protagonist Damon Blazer. With a quick mind and an instinct to flee (preferably before getting punched, but not before getting in a punchline), Blazer comes from a family whose laughs never mean just one thing. He struggles to glean what lessons he can from his brutish and detached brother, his grieving but understanding mother, and his aloof but proud father, but it’s the inheritance of his grandfather’s lessons that truly form the backbone of Blazer’s biography.”

Author:
Dylan Brody is a humorist who appears regularly on radio (including XM/Sirius) and comedy clubs around the country. He has written plays, novels, and jokes for other comedians as well as being a contributor to the Huffington Post.

Appraisal:
Damon, you have to decide, every time, whether you’re willing to face the consequences when you tell a joke. Every time. A good joke, any good joke, it tells the truth. They’re very powerful and they can hurt people and they can change the world.

Posted by BooksAndPals at 7:35 AM