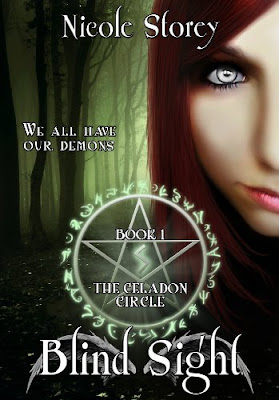 Description:
“Jordan has visions of monsters, demons, and death. Seventeen, orphaned, and born into the family business, she doesn’t have friends, she doesn’t have choices. Her uncle, older brothers, and a few annoying angels dominate her life, demanding she tow their lines – and the punishment is severe when those lines are crossed... In a game between Good and Evil where God seems to have tapped out early, lines are blurred and not everything is as it seems.”

Author:
“Nicole Storey lives in the hot and humid part of Georgia with her husband, two amazing children, and plethora of pets. When she isn't traveling to magical realms with potty-mouthed pixies or fighting demons, she enjoys reading and reviewing books, blogging, and gardening.”

Appraisal:
The Celedon Circle is a secret society of human demon slayers. Jordan is a seeker, born and raised to fight demons along with her family. Being a seeker makes her rare and highly valued for her visions of demon activity. The story starts with one of Jordan's visions of an unusually horrific monster which has been summoned in a small Tennessee town. Ms. Storey paints graphic pictures of the carnage this monster wreaks and the reader is grabbed by the throat and dragged into the story.

I have to confess I was held captive through the entire story. The Tennessee story thread is tied up nicely at the end so there is not a cliffhanger ending. However, I can't wait to see how things develop as Jordan's world is turned upside down by an unexpected twist at the end. This could turn into a stellar series. If you are looking for a different sort of urban fantasy this may be a book you would enjoy.