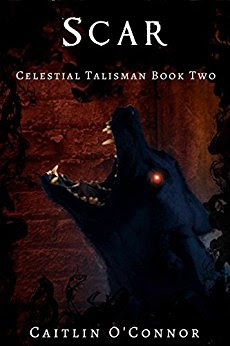 “The scar on Vinny’s wrist is nothing compared to the scars on her psyche. She isn’t a hero, she isn’t even a good person, and when a skirmish with one of the Handmaidens of the Skaath Diurga ends badly, she knows it’s partly her fault.

Nobody in the Circle could’ve guessed at the truths that attack would uncover.

One woman has sacrificed everything to end the war between Handmaidens and Awakened. Now, she’s prepared to damn everyone for her freedom. One final betrayal is all it will take to change our world forever.

Scar is the second instalment in the Celestial Talisman sequence, an adult Urban Fantasy series featuring dark, psychological themes. If you like multifaceted, compelling characters and unusual settings then this novel is sure to thrill you.”

“Caitlin O’Connor searches for truth in fiction, and drags her characters through hell to find it. A proud eccentric who aspires to be omniscient, she enjoys listening to music, trying to understand physics, and admiring unusual works of art. She lives in South Africa with her son and a malevolent lovebird that requires daily libations of blood.” Learn more about her at her website, or visit her Facebook page.

In this second installment of The Celestial Talisman series, the complicated plot twists and turns continue. There are a lot of players in this story, many of whom I had forgotten since I read book one, Finding the Phoenix, more than six months ago. I had some trouble recalling certain plot elements as well. Perhaps a little more back-story would have been helpful. This could just be my old brain becoming overloaded because I do read a lot of books. Despite that, I enjoyed the deeper development of the main characters. Blake is worming his way into my heart. But my favorite has to be Alistair. It's always the bad boys that grab my affection first. Not sure what that says about me.

The chapters alternate points-of-view between Vinny – the main character, and Amanda, the mastermind behind an evil plot to make herself lord over a new world order. Chapter headings denoting which character we are experiencing, even if they only show the character’s name, would have been a nice addition. Once I caught on to the pattern, though, it wasn’t a problem. Scar is a brilliant and unique urban fantasy, which should capture the attention of many new fantasy readers. The characters are diverse, distinctive, and suffer from realistic insecurities despite their special abilities. Vinny is a strong heroine who is becoming more secure within herself. It’s been interesting to watch her come into her own after coming from such an abusive background.

Scar has it all: a smart, intriguing plot, physical battles between light and dark, internal conflicts, excellent dialogue, and a bit of romance. This book comes to a satisfying ending with a few elements and questions still hanging for the plot to continue. Things are far from settled and I am looking forward to watching relationships develop, as well as finding out where the whole story is headed now. Caitlin O’Connor is definitely a new fantasy author to keep an eye on.

Scar is the second book in The Celestial Talisman series. It contains strong language and British and/or South African English spelling conventions. There is a glossary for South African vernacular at the end of the book. There are several F-bombs dropped.