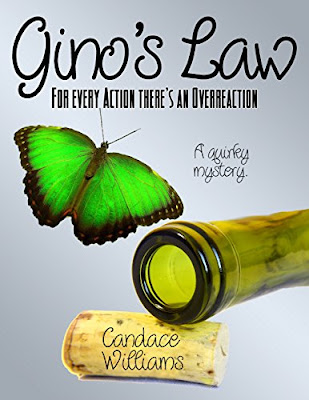 “Gino Gibaldi is a multi-phobic recluse who’s been framed for murder. Since he's claustrophobic, it’s too bad that he has to go on the run while trying to prove his innocence. Gino is a gifted creator of three-dimensional display items, such as life-sized holiday scenes for shopping malls, a pink cow that dispenses liquor for a farm-themed party, and ice carvings for hotel banquets. You should also know that he lives in a rather … quirky East Dallas neighborhood.”

Candace Williams lives with her husband and dogs in Dallas. This is Williams' second novel. Her first, The Earthquake Doll, was a nominee in the 2015 BigAl's Books & Pals Readers' Choice Awards.

The book description describes Gino's Law as taking place in a “quirky East Dallas neighborhood.” That quirkiness comes from the people who populate it. The story combines mystery (who really committed the murder Gino's been accused of) and suspense, which normally implies a serious and intense story, which this is at times. But the quirkiness of Gino and his neighbors also lighten things up some of the time.

Gino's Law should be a satisfying read for a typical mystery reader, especially those who don't mind a story that's a bit offbeat. It should also appeal to readers who prefer their stories to focus on the characters as much as the plot, which is not typical of the mystery genre.

Thanks for your review - much appreciated! I knew this story wouldn't fit into any Mystery sub-genre, so I decided to call it "quirky" and leave it at that. I had fun writing it, and hope others will enjoy it as well.

Thanks for the comment, Candace. Yeah, quirky fits and, IMO, quirky is good. :)