Way Out West by @Frank_Tuttle #Kindle 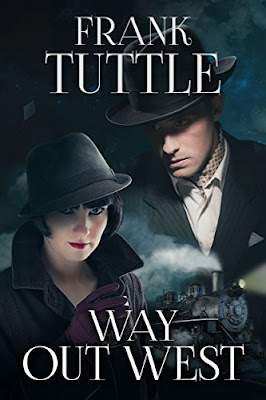 Description:
“Markhat and Darla journey into the unknown, where Trolls and worse await those who dare the wastelands, and old magics take on new life when fueled by vengeance and the undying power of greed.

Three thousand miles of haunted prairie lie between Rannit’s bustling streets and tiny frontier town of Railsend. Finder Markhat’s new case puts him aboard the steam locomotive Western Star, bound for Railsend…and the edge of the world. But before the Star sees its first sunrise, blood is spilled, and Markhat finds himself at the center of a murderous mystery.

When wartime magic of the killing sort enters the picture, Markhat realizes not all the passengers are who they seem. There’s a rogue sorcerer aboard the Western Star, a sorcerer bent on homicide — and not just one death will do.
Pressed into service by railroad law, Markhat must unravel the tangled web of lies before the next life taken is his own.”

Author:
“Frank Tuttle lives and writes in the perpetually humid wilderness of North Mississippi. Frank tried to be a proper Southern author and write about pickups and hound dogs, but trolls and magic kept creeping into his stories, so Frank is a fantasy author. Although hounds do make occasional appearances in his fiction.”

To learn more about Mr. Tuttle’s series, The Markhat Files, and his other Young Adult series, Paths of Shadow, check out his website. I also recommend checking out his highly entertaining blog or stalking him on Facebook.

Appraisal:
Way Out West is sort of like Murder on the Orient Express Markhat style, but on a moving train surrounded with magic. Mama Hog is responsible for placing Markhat, Darla, Evis, and Gertriss on the Western Star headed west to secure her latest acquisition, a town she plans on renaming Hogstown.

It’s becoming quite clear there is an unsettling old magic in the air around Rannit so it seems like a perfect time to skip town for a while. Little does Markhat realize that this old magic is drawn to a certain crate in the baggage car of the Western Star as well. It’s a wild ride of murder, intrigue, and time warps. New characters who play important parts are written with depth and style. Darla is sharp and takes on an impressive role as Markhat realizes he married up in class.

There are delightful surprises among the darkness of this tale and more twists in the plot than any roller-coaster ever invented. I was enthralled through the whole story. I love it when that happens, except it makes functioning the next day difficult from the lack of sleep. Way Out West is an exciting addition to The Markhat Files and I have to wonder how Hogstown will factor into future stories. Well done, Mr. Tuttle.

FYI:
Way Out West is book ten in The Markhat Files series. Mr. Tuttle does an excellent job filling in key elements so new readers will enjoy his stories without having read previous books in this series. However, I would highly recommend reading the whole series to fully appreciate character nuances.