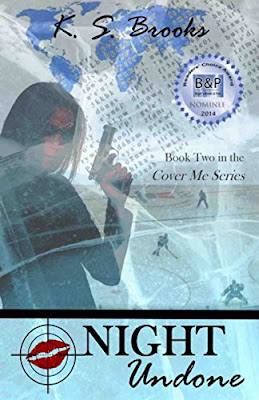 Description:
“Former Special Agent Kathrin Night is not adjusting to civilian life. More than a year after her career-ending injury, she still can’t get the hang of it. This is wearing thin on her lover, Russian FSB Agent Aleksey Khovechkin, who tricks Kathrin into seeing a psychiatrist specializing in post-military/espionage patients.

Author:
K.S. Brooks has written numerous books in multiple genres including romantic suspense, satire, and educationally oriented children’s books. She is administrator of Indies Unlimited (a multi-author blog “celebrating independent authors”), where you can often catch her pontificating on matters of interest to both readers and authors.

Appraisal:
As with the last book in this series, Kiss of Night, this book is character driven more than the typical story in this genre. However, the action, adventure, and intensity are jacked up, as you’d expect from an action-adventure or thriller. Much of what leads to that action is driven by Night’s desire to find a way for her and Aleksey to work together in a way that will satisfy the desires and needs of both.

FYI:
Some adult language and situations.

Thank you very much for the reprisal review. :)

You are very welcome! I like being able to rerun old favorites. Thanks for dropping in and commenting. :)

Thanks for dropping in and commenting, Ms. Williams.