Blame The Goth Girl Vol. 1: In The Beginning There Was Bauhaus by @BettinaBusiello 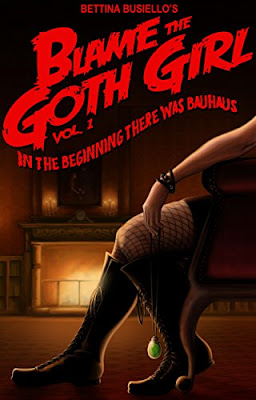 “Onyx can smell evil. No one; not even werewolves, wendigos, or vampires, can hide from her once they've committed a crime. When Onyx’s paranormal investigation of a local haunting triggers the death of a divorced mother, she is cut short by the provocative Detective Elliot Stevens. Now she must either tempt Elliot astray from his clean-cut, straight-edged path or change her apathetic ways and learn the truth about who and what she is — before what she doesn't know can kill her.”

“Bettina Busiello is a dreamer by nature with an eccentric sense of humor. She spends most of her waking hours either spinning yarns, venturing online games or cuddling her cat October. She lives in Vermont where she is surrounded by enough fresh air to make her slightly high (which explains a lot).”

I have to admit, I am torn. Blame the Goth Girl is an interesting story with many intriguing characters, which Ms. Busiello has crafted in her own unique way. This is not a cookie-cutter urban fantasy. Her fantasy world is much like our own, so suspending disbelief is easy to achieve. There are point-of-view shifts, through well-labeled chapter headings, between a few different characters. I enjoy this type of story-telling; it gives me a perspective I otherwise wouldn’t have. Also, knowing the thoughts and feelings that are going on in whomever’s head gave me the chance to identify with them on a personal level.

I enjoyed the witty dialogue and the vast array of creatures, along with a few humans. The plot is captivating as we learn how this world works right along with the other players. It seems there is more to Onyx than even she realizes.

No, no, no, just NO! You can NOT end a book with NO resolved issues! Endings like this are not considered a hook, it’s like slapping the reader in the face. Where is the cliff-hanger warning in the blurb? It shows a lack of respect to your readers, and will get you dropped like a hot potato for the scathing burn they are left with. What were you thinking, Ms. Busiello? This is not a good way to gain a base of faithful readers.

No, I’m not kidding. The book ended abruptly, and left me in frustrated disbelief. For that reason alone the book lost stars. To tell you the truth, I seriously considered rating this book two stars despite how much I liked the story so far.

In The Beginning There Was Bauhaus is the first book in the Blame the Goth Girl series and ends with a major cliff-hanger. There is one oral sex scene and several F-bombs within, so if you are sensitive to either of these you should find another book.