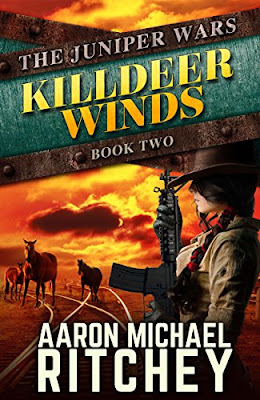 The Sino-American War has decimated several generations of men, and the Sterility Epidemic has made 90% of the surviving males sterile.

Electricity does not function in five western states. Colorado, New Mexico, Utah, Wyoming, and Montana are territories once again. Collectively, they are known as the Juniper.

It is the most dangerous place on Earth.

Cavatica Weller and her sisters have one chance to save their family ranch--a desperate post-apocalyptic cattle drive across a violent wasteland. Having escaped from Denver, the Weller family will have to face the worst of the Juniper’s outlaws, the Psycho Princess. And still an inhuman army dogs their every step.

The mystery deepens—who is the lost boy Micaiah and why would the richest man on earth spend billions to find him? And will Micaiah’s secrets tear the Weller family apart?”

Author:
“Aaron Michael Ritchey was born with Colorado thunderstorms in his soul. He's sought shelter as a world traveler, an endurance athlete, a story addict, and even gave serious thought to becoming a Roman Catholic priest. After too brief a time in Paris, he moved back to the American West and lives semi-comfortably with three forces of nature: a little, blonde hurricane, an artistic tornado, and a beautiful, beautiful blizzard.”

Appraisal:
Killdeer Winds is a rip-roaring dystopian adventure, with a Wild West flair, that will have you on the edge of your seat during the whole book. Everyone’s resolve is put into question, relationships are tested, secrets are revealed, and then everyone dies. (Just kidding.) Maybe…

Tensions run high as the plot twists and turns. Wild risks are taken as the cattle drive is now being led by Cavatica, and she is only sixteen years old. She is forced to match wits with the crazy Madelines, the Wind River Tribe, and the Vixx Sisters’ army of biologically altered soldiers. All while trying to come to terms with a budding new love, that flipping New Morality Code, and family turmoil. It’s an out of control emotional roller-coaster ride as each new battle adds more complications.

Killdeer Winds is not a relaxing read by any stretch of the imagination. I’ve never read anything like this story before. It’s a thought provoking adventure that will grab you by your throat as well as your heart. And just as you think everything is going to work out, things go to hell in a hand-basket. Yep, of course there is a cliffhanger ending.

FYI:
Killdeer Winds is book two in The Juniper Wars series. It is necessary to read the first in the series Dandelion Iron.

Format/Typo Issues:
I was given an ARC to read before the book was published and cannot comment on the finished book.