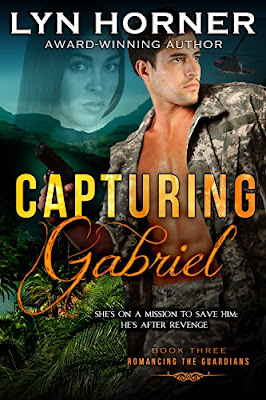 Description:
“What’s a handsome Colombian psychic with super-hero-power to do with a spirited Navajo beauty who invades his territory? Why, kidnap her of course.
Chopper pilot Josie Tseda served in Afghanistan, extracting soldiers from deadly situations. She knows how to take care of herself. But when she vows to find Gabriel Valdez, a Guardian of Danu, and deliver him to a gathering of the Council of Guardians, she may have bitten off more than she can chew.

Locating Gabriel in the mountains of Colombia is hard enough. Josie didn’t count on ending up his prisoner – or on falling for him.

Gabriel is battling Colombian drug traffickers and seeking revenge against the man who murdered his mother. He’s not looking for romance and doesn’t trust the feisty American female who wants to fly him off to the U.S. The message she conveys directing him to return with her, supposedly coming from the High Guardian, may be a lie to ensnare him and steal the precious scroll he guards.
Yet, he can’t help wanting her. Will he allow her to capture his heart or will the secret power he wields ultimately drive her away?”

Appraisal:
Josie Tseda is totally out of her element on this mission to collect Gabriel Valdez from the midst of the Colombian mountains. Gabriel is busy fighting his own war in hostile territory and has no reason to believe Josie’s far-fetched tale of murder and intrigue. The action and tension start early in this story. Josie must learn to change her tactics and go along with Gabriel for her own safety; in the process she is able to learn more about the man who holds her captive. As her trust grows, Gabriel lets his guard down a little at a time.

As their mutual respect increases so does the passion neither one of them can deny. Showing that vulnerability, though, is another story for both of them. They are both warriors, so getting them to fight for a kindred cause at the same time is the biggest problem. Being a guardian of an ancient scroll complicates Gabriel’s quest to avenge his mother’s death against the local drug cartel. He is an honorable man and believes in both causes.

This book has it all; adventure, violence, sexual tension, magic, and a heart-rending family history to hold it all together. I think Gabriel is my favorite character so far, and it makes my heart ache for him at the same time for the burden he has to carry. What more could a reader ask for?

FYI:
Capturing Gabriel is book three in Lyn Horner’s Romancing the Guardians series, following Rescuing Lara and Decoding Michaela. I would recommend reading this series in order. This book does contain sexual situations that may offend some.

Many thanks for your review, ?wazithinkin. I'm so glad you enjoyed Gabriel and Josie's story. Gabriel is one of my favorite characters in the series, too. :)

Thanks for dropping in and commenting, Ms. Horner. This series has some fascinating elements, which I am really enjoying so far. I can't wait to see where you go next with the story.