Ghost of a Chance by @EjDivitt #Kindle 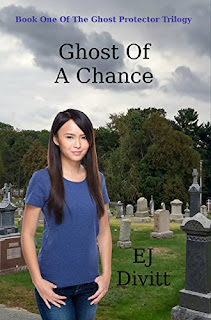 Description:
“No one told Jenny Chang she is descended from a long line of supernatural protectors. When her father is murdered, the mantle of Protector passes to her. Suddenly thrust into the world of the dead and beholden to Zhong Kui, the King of Ghosts, Jenny struggles with new powers and new responsibilities. As she tries to find her way, Jenny must face an old evil that is loose in the world and uncover a secret buried in her family’s past.”

Author:
“EJ Divitt lives with her husband in a house they plan to live in forever. She enjoys curling up with a good book and a hot cup of tea, can often be found singing along with the radio and has a brown belt in karate.

She has multiple nonfiction titles available including: Daily Writing Prompts To Spur Creativity, I'm Engaged! Now What? and Things Every Goddess Should Know.”

Appraisal:
Ghost of a Chance is the story of a small, dysfunctional family of Chinese heritage who have the dubious honor of being supernatural Protectors. The mantle of Protector is passed to Jenny Chang at her father’s untimely death and she has just graduated from high school. She is also completely unaware of her heritage due to her mother’s fear. As such, dramatic consequences arise to complicate the plot.

As a supernatural protector, Jenny is essentially a ghost whisperer and it is her job to help ghosts pass over to the next realm when their progress is impeded. Sometimes it can be as simple as passing messages along to remaining family members. However, the crux of this story is about an evil shadow creature who is snatching souls before they go into the light. With each soul this evil grows stronger.

Ghost of a Chance is told through Jenny’s eyes. The problem I encountered is the author tells us every single move Jenny makes as she moves through her day, detail that is not moving the story forward. There is way too much telling rather than showing. Granted there is a lot of back-story that needs to be established, but mundane details slow the story down and cause a disconnection between the reader and the characters.

There are certain elements of the story that work well and show promise. The overall plot is unique, but things fall apart in other areas. I would suggest joining a fantasy author writing group for constructive feedback and aim for middle-grade age group for readers perhaps.

FYI:
Ghost Of A Chance is the first book in the Ghost Protector Trilogy.