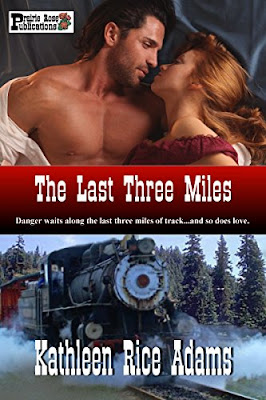 Description:
“When an accident leaves Hamilton Hollister convinced he’ll never be more than half a man, he abandons construction of a railway spur his lumber mill needs to survive.

Believing no woman shackled by social convention can be complete, railroad heiress Katherine Brashear refuses to let the nearly-finished track die. The magic of Christmas in a small Texas town may help them bridge the distance…if they follow their hearts down The Last Three Miles.”

Author:
Kathleen Rice Adams: “Descended from a long line of Texas ranchers, preachers, and teachers on one side and Kentucky horse thieves and moonshiners on the other, award-winning author Kathleen Rice Adams had no choice but to become an outlaw. Maybe that's why in her stories, even the good guys wear black hats.

Appraisal:
After a railway construction accident that leaves Hamilton Hollister in a wheelchair, possibly for the rest of his life, Ham is ready to give up his legacy. With only ten more miles of track to be laid, Dr. Oliver Madsen refuses to let Hamilton wallow in self-pity. Without the completion of the railway spur Hollister Lumber, as well as the small town of Hollister, Texas, will be doomed. It’s easy to understand why Hamilton deems the railway project too dangerous to complete; the accident has left him scarred physically and emotionally.

Enter K.M. Brashear, railroad heiress from New York, who along with Oliver refuses to let the nearly finished track die. Katherine is not your everyday delicate heiress, she is intelligent and capable enough to handle the job. Hamilton is quick to dismiss her and order her back to New York. However, she is on a mission to prove to her father she is as competent as any of her brothers. With Oliver’s help Katherine takes command of finishing the railway and overseeing the lumber mill. Katherine defies the social norms for women of her station and does her best to win the respect of the employees in her determination to finish the railroad by the deadline. But her methods could cost her everything she comes to care about.

I found the story-line realistic and well-paced. The characters are well drawn with distinct personalities. Their banter and dialogue is also believable and engaging. I had to chuckle when Hamilton had to admit he had been out-stubborned by Katherine’s progressive attitude. The twist near the end was shocking but conceivable and heart wrenching. I found myself captivated by this novelette as Hamilton realizes he has met his match in more ways than one.

FYI:
This is a steamy read but not inappropriate.