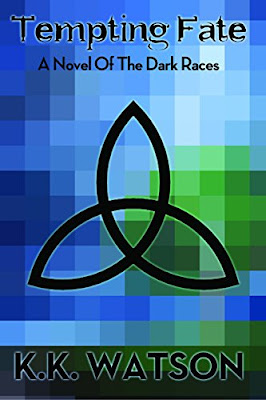 Description:
“After losing her adoptive parents in a horrific car accident, Elena Kelly is sent to be raised by her cousin, Gregory. On Elena's twenty-fifth birthday, Greg takes her out for a nice birthday dinner. While in the ladies room, a strange creature pulls her through a mystical mirror.

Elena lands on a strange beach in a strange dimension and comes face to face with a creature she has never seen the likes of before. Out of thin air, a handsome, dangerous Sorcerer appears and fights the creature. Terrified, injured, and in a strange land, she is forced to trust the stranger who just saved her life.

On the way to find her cousin, he tells her an unbelievable tale of her true origin. Elena is next in line for the Fae crown, her fate is to unite the Dark races, and her life is in danger.

Once she is reunited with her cousin, she discovers that everything she thought was real is a lie, and she lives in a world with Vampires, Witches, and Demons.
As Elena's powers increase so does the danger she faces. She must learn to fight and come to terms with who she is if she has any hope of saving herself as well as the ones she loves.”

Author:
“K.K. Watson grew up and currently resides in Winter Park, Florida. During the day, K. K. works a very technical position in the Environmental Sciences field. As a creative outlet, she tried her hand at writing, and the result is the Dark Races series. In her spare time, K. K. loves to read chick-lit, edgy paranormal romances, and urban fantasy. Like her reading, K. K. likes to write stories that are sexy, dark and suspenseful, with strong heroines and hot alpha-males.”

Appraisal:
Tempting Fate is a compellingly unique story and has good pacing. The characters are varied and well developed. I wanted to add coming-of-age to the genre listing, but that doesn’t quite fit. Elena is twenty-five years old, but has just learned her heritage as a Fae. She was raised as a human and shielded by protective magic to hide her from the magical realms. She has a lot of catching up to do as she learns about her newly budding powers. Her strong personality comes across as an entitled bratty child. There were several times I rolled my eyes or wanted to slap her. I had to remind myself Elena is out of her element and floundering to find out how she fits in.

With the help of her new demon friend, Amber, she is introduced to vampires, witches, and an oracle. Amber is a wonderful character who provides Elena a sounding board. She is knowledgeable about the ways of the magical realm, witty, and lots of fun. Aiden of Avalon, the last druid, is charged with Elena’s protection concerning a prophecy that will unite the Realms of the dark and light Fae. Elena has the weight of the world on her shoulders while trying to learn about this new world she has been thrown into.

Tempting Fate is told through Elena’s eyes so we are allowed her personal insights and struggles to come to grips with her new life. This seems to be Ms. Watson’s debut novel, which I found to be not quite ready for prime time. I would have enjoyed this book so much more if I hadn’t had to wade through the freshman editing errors/mistakes. Beside the commonly found errors of missing, extra, or wrong words and punctuation, I found Elena’s mother’s recounting of her past full of inconsistencies. Another problem I encountered was repetition; while there is a lot going on, I think there are certain aspects of the story that stick with the reader and we don’t need a rehash to follow the story-line. With the help of a good editor these problems could be ironed out to make a more focused, cohesive story. This novel is well worth the investment to add a final polish.

FYI:
Adult sexual situations and language. If you are sensitive to F-bombs, I have to warn you there are several.

Format/Typo Issues:
Sadly this book, as it stands, is riddled with issues that range from proofing errors to problems with story consistency.