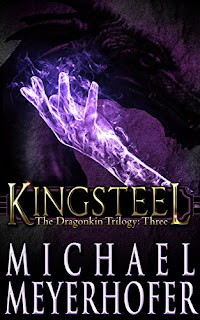 Description:
Kingsteel is the conclusion to Michael Meyerhofer’s The Dragonkin Trilogy. Rowen Locke has prevailed in the most recent battle, but the war is only getting bigger. Locke and company must stop the Dragonkin before it’s too late.

Author:
Michael Meyerhofer began publishing poetry before penning The Dragonkin Trilogy. Meyerhofer has a BA from the University of Iowa and MFA from Southern Illinois University-Carbondale. He currently lives in Fresno, CA.

Appraisal:
Kingsteel is the conclusion to Michael Meyerhofer’s The Dragonkin Trilogy. I was hopeful going into it, but a little leery because I’ve been disappointed in the past with trilogies.

Well, that is NOT the case with Kingsteel.

The world Meyerhofer created is vast and filled with many different compelling characters and creatures. Meyerhofer gives each of them their due, showing their strengths and weaknesses as they battle to rid the world of the Dragonkin. They run into some of the worst people and at times seem as though they may not make it – and not all of them do.

What was important was that it wasn’t just Rowen Locke who could save the world – though he’s made to think he has to lead them. Yet, it’s teamwork and trust from an unlikely group of friends that winds up prevailing in the end.

Kingsteel offers a satisfying conclusion to this story, but hopefully not the ending to this great world.

FYI:
Kingsteel is the third book in a trilogy and should not be read without checking out the first two books.